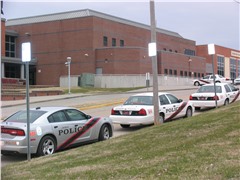 All Jackson R-2 schools were dismissed early Friday morning due to a bomb threat targeting Jackson High School that was posted on Instagram. All students were evacuated safely and no one was injured.

Superintendent Dr. John Link said he received a text message at 7:20 a.m. from a grandparent who was shown the Instagram post, and that high school staff and the Jackson Police Department evacuated all students out of the building by 7:50 a.m.

7:50 a.m. marks the start of the school day at the high school, so many students had not arrived by the time the evacuation started. Staff members were at the high school parking lots directing students to go back home. Around 1,000 students who were evacuated were taken to the bus loop and transported to the junior high, where they could be reunited with parents or take the bus home.

Link said that the decision to close all other schools in the District was an easy one, due to the anticipated snow on Friday. “We had sent out an earlier message to the parents to be prepared for an early release because of the weather, so most of the parents already had a plan intact.”

Link added that after the news of the bomb alert spread, some students were already being pulled from the elementary schools by their parents.

An investigation into the incident began on Friday and ended Saturday morning, when a female juvenile was arrested for making a terrorist threat. The juvenile has been referred to the juvenile authorities.

Jackson Police Lt. Alex Broch said the police department worked with several federal agencies during the investigation including the Bureau of Alcohol, Tobacco, Firearms and Explosives.

After the high school was evacuated, the school was searched by law enforcement. No evidence of a bomb or any other items mimicking a bomb were found.

Link said all the schools in the District had safety drills a week before the evacuation, but the specifics on what to do when receiving a bomb threat before school even starts is something that is hard to prepare for. He added that he was thankful everyone was safe and that they can learn from this.

“We are prepared for situations like this,” Link said. “We just never know when they are going to happen.”
He thanked students, parents and the community for helping make this evacuation and release as smooth as possible.

“You don’t dismiss and evacuate 5,000 students in less than two hours unless you have full cooperation from everybody,” Link said.