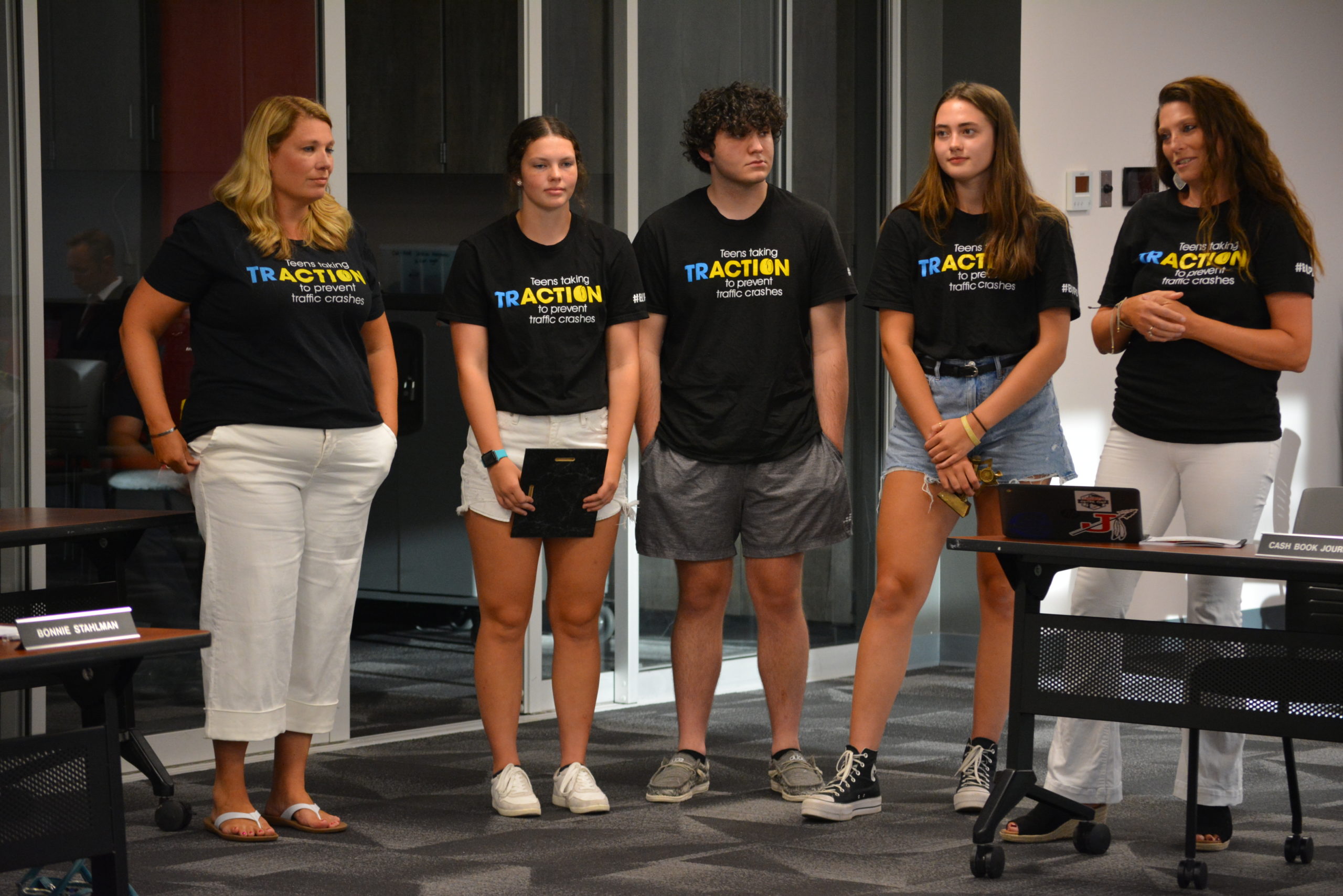 Jackson High School members and sponsors of J-Click presented to the school board on their participation in the Traction Training Conference this summer. Photo by Jay Forness

The Jackson R-2 School District approved new attendance procedures for the upcoming school year during its July 12 meeting – providing a consistent plan throughout the school buildings and limiting unexcused student absences to 10 days per year.

Associate Superintendent Jessica Maxwell said attendance issues have grown in the district, with attendance reaching an all-time low this past school year. “During the last quarter of school, we were seeing that our student attendance was as bad as it’s ever been,” she said.

In 2021, the district’s attendance rate fell below the state’s average, with 81.1% of students attending school 90% of the time or more. Across the State of Missouri, 82.3% of students passed the 90% attendance mark last year.

Maxwell said the COVID-19 pandemic has perpetuated the issue, but the district had seen a rise in chronic absences before the pandemic.

Maxwell said 533 students were absent at least 10 days in a single semester during the 2018-19 school year, compared to around 300 students the year before and around 200 students two years prior.

During the 2019-20 school year, despite not having school for a quarter due to the beginning of the COVID-19 pandemic, around 300 students reached the point of missing 10 days in a single semester.

Maxwell said students who frequently miss school are more at risk for low academic achievement, social problems and dropping out of school.

“Often times with our kiddos who are chronically absent, there are lots of legitimate reasons they are missing school,” Maxwell said, adding that transportation problems, family activities or parental illness were some of the reasons students could miss school.

Previously, students were allowed 10 days of unexcused absences each semester before referrals would be made to the prosecuting attorney and other authorities such as the juvenile court and the Missouri Department of Social Services’ Children’s Division.

Families of any student who misses 10 days could be contacted by the prosecuting attorney and receive a $500fine and/or probation for educational neglect. The new plan switches the 10-day limit to be for the full school year, instead of resetting at the end of the first semester.

“By November, we had kids who had almost missed ten days and we worked with the families, but then it would reset in January,” Orchard Drive Elementary School Principal Christine Zirges said. “By the time that they would hit 10 days again in February or March, we really allowed them to miss a lot of school.”

“We have so many interventions right now in the school system to help kids that are absent or to get them caught up, but when they get to the point of 10 days or more, that is still hard to do,” Jackson Junior High School Principal Bryan Austin said.

The new attendance plan includes notification procedures on how schools will reach out to families after several absences. Families will first be notified with automated emails and phone calls after a student’s third and fifth absence.

After a seventh absence, a letter and personal phone call will be made to family members. If the absences are unexcused, a Jackson R-2 social worker may make a home visit and the district may contact a juvenile officer. The district will also begin requiring doctor’s excuses for future absences at this time.

Jackson Middle School Principal Michael Martin added that these early steps are to connect with families and try to fix the attendance issue.

After the 10th unexcused absence, a Jackson R-2 staff member will hand deliver a letter to the student’s home and a juvenile officer will be contacted. After an 11th unexcused absence, the Missouri Children’s Division educational neglect hotline will be called and the matter could be referred to the prosecuting attorney’s office.

“Prior to COVID, we were working with the prosecuting attorney’s office to file a charge, and due to COVID that was no longer happening,” Maxwell said

Maxwell said the district has met with the prosecuting attorney, the Missouri Children’s Division and the juvenile office, as well as the Cape Girardeau Public School District to create this new plan.

“It’s been really nice to hear that all these entities are trying to work together to support students and families with different resources to make sure that kiddos are in school learning,” Maxwell said.

Maxwell said the attendance plan will look similar to Cape Girardeau Public School’s plan for the upcoming school year, and the two larger school districts have reached out to smaller public and private schools within the county to share their plans.

• Two changes to school board policies related to student discipline were approved. The policy on student discipline in instances of academic dishonesty was updated to match student handbooks. The policy change removed “course failure” and “removal from extracurricular activities” as possible punishments for multiple offenses of academic dishonesty.

In all cases of cheating or plagiarism, parents will be notified, the assignment or an alternate assignment would need to be redone for full credit and students would receive an office referral which could include a conference, detention, in-school suspension, no credit for work and/or a grade reduction.

The policy including student discipline hearings with the school board was amended to include that a licensed court reporter could record the hearing and prepare a written transcript.

• The board approved the student handbooks for the upcoming school year, with handbooks approved for the elementary schools, Jackson Middle School, Jackson Junior High and Jackson High School.

Maxwell said the handbooks were revised this year and now include references and passages from relevant school board policies. “We wanted to ensure that what we are sharing with our students and families matched with our board policies,” she said.

The handbooks now include the asbestos hazard letter and “Parents Right to Know” information required to be sent out to families. “Instead of sending out separate letters, we are including them in the handbooks now,” Maxwell said. “We are trying to streamline everything and have it all in one place.”

Maxwell said besides these additions, including hyper-links to board policies in digital versions, there weren’t changes in the handbooks.

• The board approved the district’s communication and professional development plans. The communication plan highlights the different ways the district communicates with the Jackson community – including social media guidelines, media relations and emergency channels of communication.

“One of our big major focuses across the whole district this year is safety,” Associate Superintendent Janelle Pope said, adding that active shooter training will be given to all staff members throughout the year.

Pope added that district teachers will lead some of the professional development training. “We know that our staff is outstanding at what they do,” she said. “The feedback that we’ve received is that they love to learn from each other, so we want to give them the opportunity to do that.

• Leadership members and sponsors of the Jackson High School club J-Click presented about their recent participation in the Traction Training Conference in Cape Girardeau last month. During the conference, the students won the Golden Buckle award for their good character and teamwork during the conference.

J-Click allows students to take an active role in promoting safe driving habits and address traffic safety concerns at the high school. The Traction Training Conference, hosted by the Missouri Department of Transportation, was one of three summer conferences held throughout the state.

The Jackson students created an action plan for the upcoming school year during the conference. They plan to expand their outreach beyond the high school, visiting younger students throughout the district.