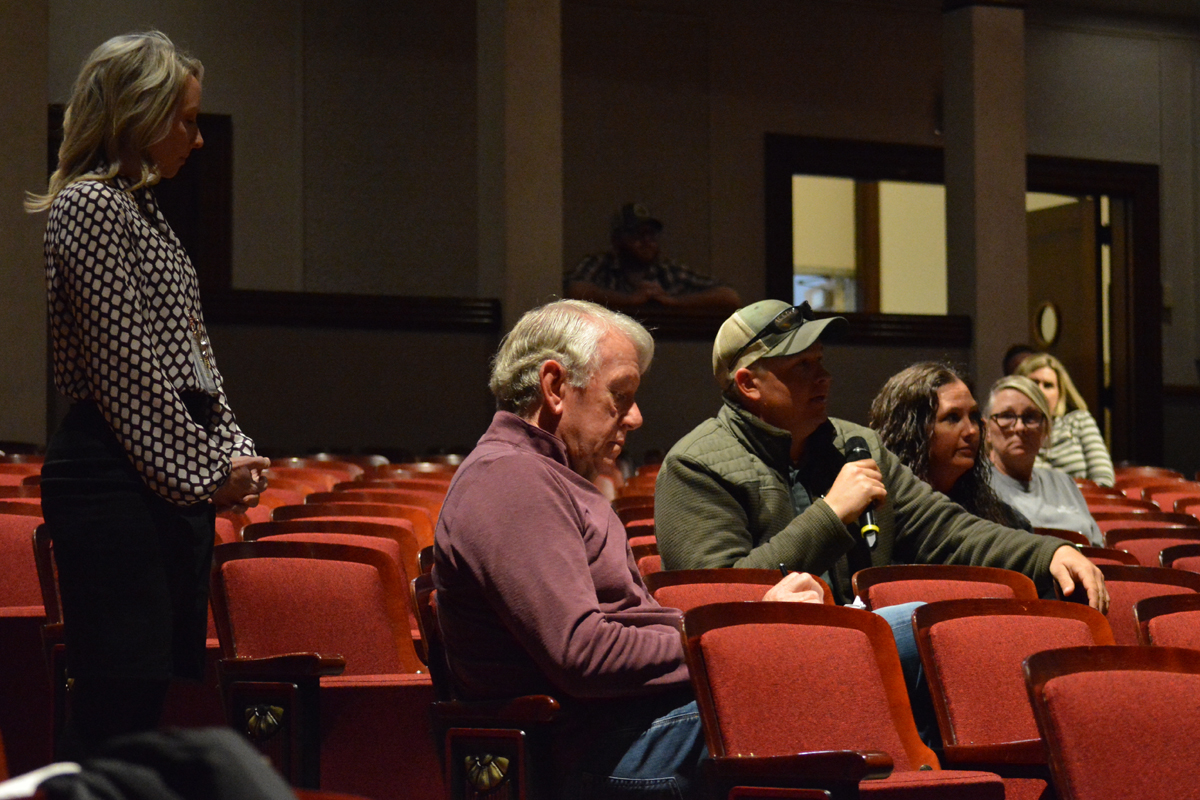 The Jackson R-2 School District held meetings on April 21 and April 25 to gather public input during its strategic planning process. Jackson R-2 is expected to complete a new strategic plan this summer, which will give guidance for the next five to six years.

Superintendent Scott Smith guided the discussion, asking the community members a set of questions dealing with the district’s strengths, weaknesses and ways the district could improve.

“The last strategic plan in Jackson was six years ago and it had some goals that the community and the district established,” Smith said. “Every one of those goals have been met – one of those was the Prop J renovations.”

The previous strategic plan also led to realigning building grade levels, providing every student with their own tablet and service learning opportunities across the district.

Community members and parents who were not able to attend the in-person meetings will be able to provide their own thoughts through an online survey expected to go out in the next few weeks.

“Developing a strategic plan involves getting as much input as we can from our community, from our staff, from parents and from our students,” Smith said, adding that each group the district has met with over the past few months has received the same questions.

Those in attendance were asked about things the district could do immediately to help students and teachers, what challenges the district will face in the near future and what skills students need to learn to be successful in their life after graduation.

Topics mentioned by the community members wanted students to learn included how to fill out job applications, people-facing skills including how to have face-to-face conversations, cursive writing, spelling and driver education.

Smith also asked the audience to share any rumors they have heard about the district. One rumor was that a family was threatening to sue the district so a student could use a litter box as a restroom. “Social media can grab ahold of anything and make it seem like its true,” Smith said. It’s a challenge for us and I promise you we don’t have litter boxes anywhere in our district.”

Smith added that no administrators have informed him about anyone threatening a lawsuit related to litter boxes. “That’s not something we are going to do and it violates every health ordinance we have to follow,” he said. Smith asked the public to contact the schools or Smith directly to learn whether a rumor  is true.

An audience member asked Smith about recent news reports related to a lawsuit connected to the district’s construction of the high school event center in 2010.

“That is not a rumor, that is a fact,” Smith said. “We have been sued and we lost. We have already written a check for $4.5 million to settle our debt. We had enough funds in our reserves that we could do that without impacting our student learning at a drastic rate.”

A civil trial held in 2019 found that the district acted in bad faith by withholding payment from Total Electric and ordered the district to pay damages totaling $800,000 in addition to interest and attorney’s fees. The district made its payment of more than $4 million after the Missouri Supreme Court denied hearing the case on Dec. 22, 2021.

Smith said the issue of whether the district is required to pay compound interest, which would total an additional $5.2 million, is currently waiting for a judgment from the appeals court.

“If we have to pay compound interest, that will have an impact on our district,” Smith said. “One of the things that we have done is working with our admin team to see what we can do now to keep this from impacting our students.”

Smith said they were hopeful that the district wouldn’t have to pay the compound interest, but have developed a plan to combat the potential loss of funds and have already identified some internal cuts for next year.

District staff were asked during the meeting how the district is handling employee shortages – both with teachers and with support staff.

Smith said the district isn’t currently as aggressive in teacher pay for teachers with experience or who have been working in the district for a long time. He added that increasing the higher end of teacher’s pay would “likely require a tax initiative.”

When it comes to non-certified staff, Smith said the district is struggling to fill open positions such as for bus drivers. “I’ve driven twice last week and I’m driving tomorrow,” he said. “If you see me behind the wheel, you know they’re desperate.”

Smith said the district has gone from having 70 custodians district-wide to 44 over the past three years – despite several of the buildings now receiving additions during that time.

“We can’t compete with Walmart and McDonalds,” Smith said, “I never thought as a superintendent that I would be competing with those entities for workers, but I am.”

Class sizes at the preschool and elementary school level range from 19 to 26 students, with an average class size around 22 students. At the secondary level, core classes are between 23-26 students and most elective classes are capped at 28 students.

“We advocated for teachers to reduce class sizes,” Associate Superintendent Jessica Maxwell said. “There’s no research to support that it affects student learning, but we know it does impact teacher burnout, so that’s why that decision was made.”

Maxwell said the curriculum is reviewed yearly, with teachers volunteering to serve on various curriculum committees. She said the state has learning standards for each grade level and subject that the district has to make sure gets taught.

Toward the end of the meeting, some in attendance asked how the district handles transgender students in the schools. Smith said.

“As a district, we have stood by that a student will go to the restroom and locker room of the sex they were identified at birth,” Smith said. “This is the stance that this district has taken, and we will continue that practice.” Smith said there are gender-neutral single-stall restrooms that students can use.

The district will also accommodate students’ preferred pronouns, but will not change students’ official records.