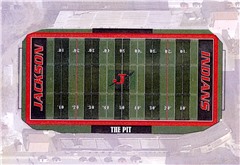 The School Board approved Incite Design Studio and VSR Design to design the fields in December and approved taking the project to bid at the latest School Board meeting on Feb. 13.

The District will look for bids for the turf product itself, as well as for a lease-purchase proposal for 3-5 years from Jackson area banks.

The high-end estimates for the project total $1.8 million. The football field is estimated to cost $885,000, which includes $96,000 for a shock absorbent pad beneath the turf that helps avoid concussion injuries.

As part of the renovation, the football field will have a new fence and concrete around the field, as well as work done in front of the home bleachers to make it accessible. The field will also shift slightly, requiring the District to buy new goal posts as well.

The soccer field is estimated to cost $974,000 including $112,000 for the shock pad. The soccer turf will be green with white lines (no team name), but will cost more than the football field because it is larger.

Superintendent John Link said the current fields are costing the District a lot of time and effort keeping them maintained, and the turf will be easier to take care of.

The District plans to interview bidders before making a decision on what product they will use.

The plan is to install the football field’s turf by the end of May and then complete the soccer field before boy’s soccer needs it in the fall.

• The board approved calendars for the next two school years, featuring the same number of student attendance days as the current school year.

Next year, classes will start two weeks later than usual on Wednesday, Aug. 22. Link said this move was made to accommodate the construction across the district, but “crunched” the rest of the year. Students will still get two weeks off around Christmas, but spring break will be one day shorter. The tentative last day of classes is Friday, May 24, right before Memorial Day weekend.

Because of the shortened school year, one of the district’s professional development days will be flexible for teachers to take anytime between July 1, 2018, and June 30, 2019.

The flexible day would be considered contract time and would be approved by the principals. Link mentioned that there are many opportunities for how teachers could use the day including going to a conference.

The 2019-2020 school year will be similar, with two weeks off around Christmas and four days of spring break. The first day of classes is scheduled for Aug. 15, and the tentative last day is May 20. The flexible professional development day will continue if it is successful next year.

The new calendars are located on the district’s website.

“When it became available, we wanted to get it because land is pretty precious around here and with our growth, we know down the road we will have to build something.”

The board had gotten interest from multiple residents to use the land until the district needs the land for a new school building. One potential bidder had farmed on the land in the past.

• The Shine Club at East Elementary presented at the beginning of the meeting. The club, which was started by two students last year, meets every Tuesday at lunch and aims to make special education students feel more included and to help those in need.

Shine Club made dis-ABILITY awareness posters that students put up in area businesses and has planned to help with the Special Olympics this spring. The club also had a back-to-school bowling party and sold ornaments to raise over $300 for Africans in need.

Next year, the club will also be offered at the middle school.

• The board approved a review of the agricultural education department. The educational program is built on instruction during classes, supervised agricultural experiences and the FFA student organization.

The review found that the program met all eleven of the program’s educational goals through their course offerings and outside experiences. Around 560 students took agricultural classes this school year.

KT Power System will supply the track lights for $9,900. The district will also owe the City of Jackson around $15,000 for permit fees and a transformer. Link added that the project came in well below what they budgeted.