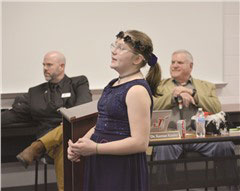 The Jackson R-2 School Board approved the Seal of Biliteracy program, which allows students to prove their language proficiency on their transcript. If approved by the Missouri Department of Elementary and Secondary Education, Jackson would be the first school district in Southeast Missouri to offer the program.

Students who receive the seal can receive 12 to 24 college credits, bonuses in the military or an easier time finding employment after graduation. “This benefits every one of our students,” Kellie Riggs, the French teacher at the high school, said.

“It makes our kids marketable, and this doesn’t just impact these kids who are English speakers who are in one of our classes learning another language,” Riggs said. “It also impacts our growing population of native speakers of a language that is not English. They can then show their proficiency in English and still obtain the Seal of Biliteracy. So it impacts all of our students, whether or not they are native English speakers.”

In addition, the Seal of Biliteracy can be obtained for any language, not just the ones for which Jackson currently offers classes.

Riggs said that by offering both types of seals, students who have made it to Spanish 2 or French 2 can still benefit from this program, while students who are native speakers or in AP classes can achieve the distinguished seal.

Riggs said the program is nationwide, with 38 states participating, so students can also get credit at institutions from other states that accept the program with some additional paperwork. “Missouri is not alone in this, this is a nationwide effort,” Riggs said. “But in the state of Missouri, it basically centers on our big cities. There’s no one here in Southeast Missouri yet.”

Southeast Missouri State University is not a part of the program, but Riggs said that once it was approved at Jackson, they would try to meet with SEMO to see if they could also accept the seal. “We really think we could bring them to the table and get them on board with this too,” Riggs said.

Businesses who have endorsed the Seal of Biliteracy include Ameren, KWS Gateway Research Company, MasterCard, Midwest Bank-Centre, Missouri Mell and the St. Louis Regional Chamber. In addition, students with the seal who go into the military can receive up to a $1,000 bonus per month for being bilingual.

To receive the seal, the student needs to pass a standardized test in English, another in their second language, and show they have a high level of sociocultural competence.

The English test can be the ELA portion of the ACT or the English 2 End-of-Course (EOC) Assessment. Students must score an ACT English score of 18 for the Missouri seal and a 21 ACT English score for the distinguished seal. If they use their EOC Assessment, a proficient score is needed for either seal.

“Almost all of our juniors take the ACT and all of our kids take the English 2 EOC, so they have two opportunities to obtain this,” Riggs explained.

The other language’s standardized test can be an Advanced Placement (AP) test or a Standards-Based Measure of Proficiency (STAMP) test. For the AP test, students must score a three or higher for the Missouri seal and a five for the distinguished seal. For the STAMP test, students must score “intermediate mid” in each portion of the test for the Missouri seal and an “advanced low” in each portion for the distinguished seal.

Students will be responsible for paying for this test, with the AP test costing $90 and the STAMP test costing $17.50. Riggs said students will only need one of the tests, and the student can make the decision on which one they choose.

For the sociocultural competency requirement, the foreign language department said they would require an essay about language acquisition as a whole. The requirement is to make sure the students have a positive attitude towards being bilingual and towards the cultures that use both languages. The department has already created a rubric to grade these essays.

The first step to get the Seal of Biliteracy program started at Jackson was Board approval. Now that the Board has approved moving forward, the District will fill the initial application with DESE for approval and appoint a District coordinator for the program. The coordinator will most likely be someone from the foreign language department. The program will not have any additional costs for the District.

The foreign language department at the secondary schools brought this program to the administration and would like to start offering it this year for high school seniors.

• The District recognized the School Board for what it does for Jackson schools, which is done annually around School Board Appreciation Month. “They don’t get paid, and they take a lot of heat sometimes,” Superintendent John Link said of the Board members. “They do a great job.”

Link added that they are usually on the same page as a Board, but when they disagree, the Board finds the best solution for the students. “The one thing we do agree on is that whatever decision is made by these seven people, it’s always what is best for the kids.”

Students from the junior high delivered letters and candy to the Board members, and students from South Elementary presented a music video they made showing their appreciation.

• Adelyn Stallings, a student at North Elementary, presented to the Board about healthy eating. She had learned more about the topic from the after-school We-Run club. She spoke about how to eat healthier at various local restaurants.

• The Board raised salaries for field trip school bus drivers and cooks to align with the current state minimum wage. Schools are legally exempt from the minimum wage increase, but the District decided to follow the increase regardless. Link said they will have to look at the budget to see how to deal with future increases in the minimum wage.