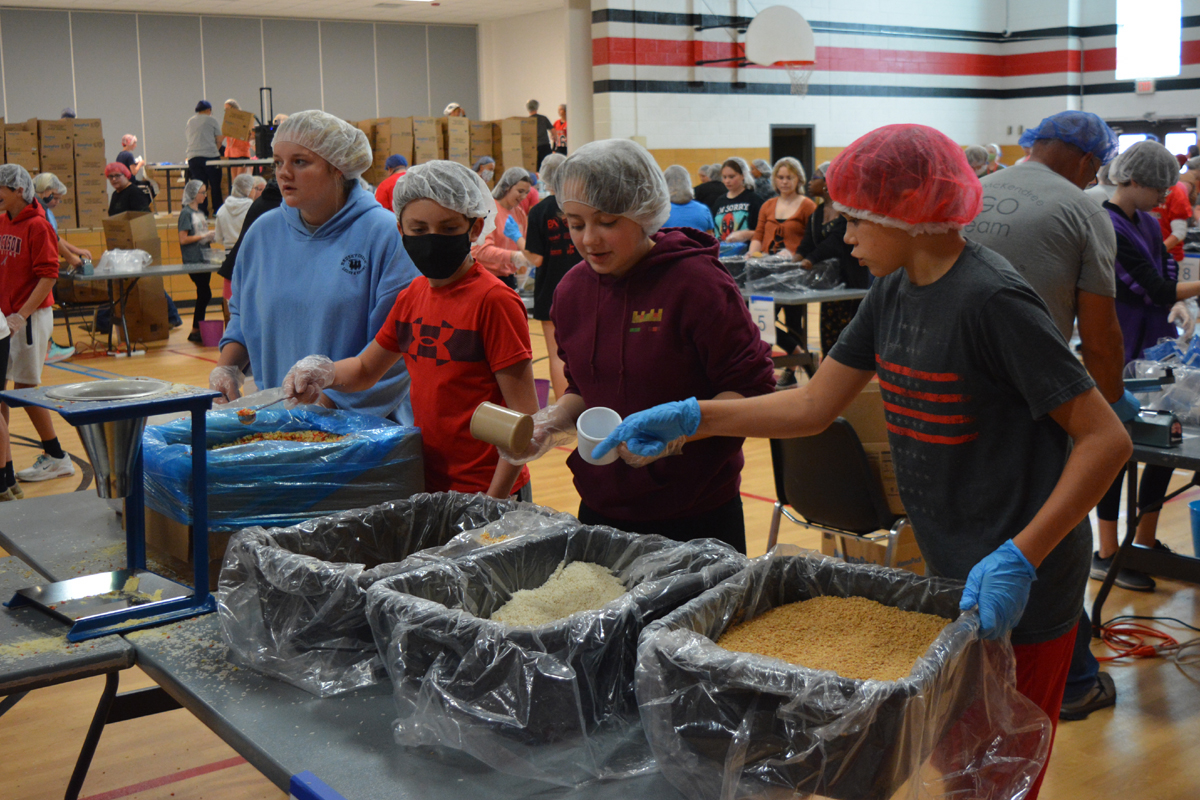 Eighth graders at Jackson Junior High School packed more than 101,000 meals for children in need on September 9-10 for Feed My Starving Children. The event was part of the district’s service learning initiative, which aims to teach students to be socially responsible citizens. Photo by Jay Forness

Students at Jackson Junior High School were able to pack 101,088 meals last week for Feed My Starving Children, as part of the school’s service learning initiative.

Over Thursday and Friday, every eighth grader volunteered in packing enough meals to feed 276 kids for an entire year.

These “MannaPack” meals, which include rice, soybean protein and dried vegetables, will be shipped to help feed malnourished children around the world.

This was the first year the school held a Feed My Starving Children packing event, but JJHS Principal Bryan Austin said they plan for it to become an annual event for the eighth grade class. 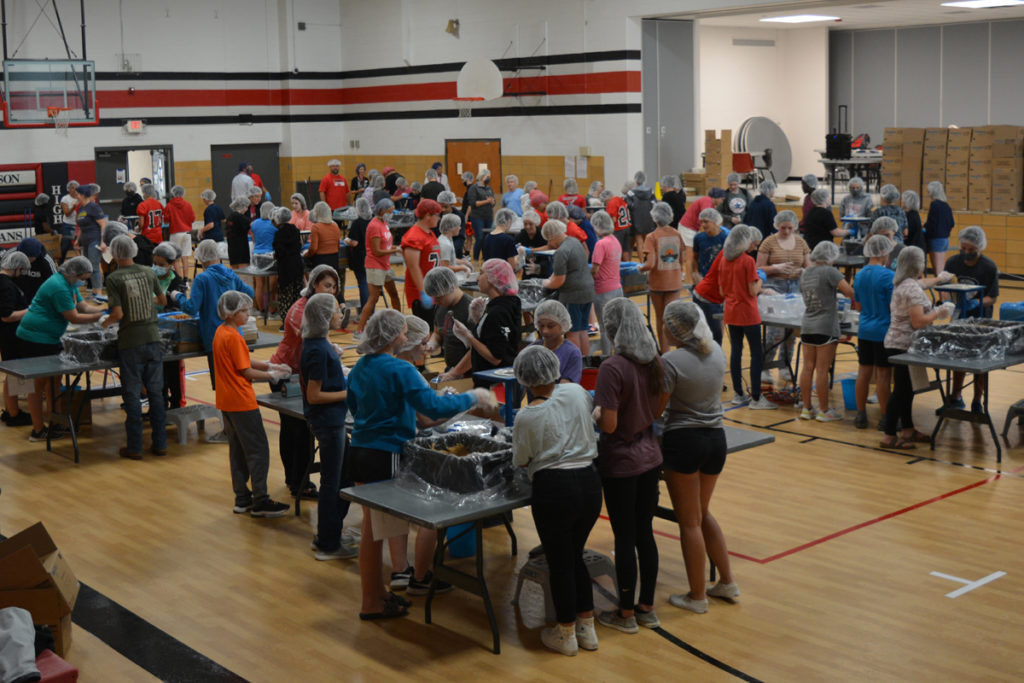 The students packed the meals in the junior high’s old gym with their advisory class.

“It’s been two years of planning,” Austin said. “All our kids raised money for this event, as well as some of our business partners and faith-based groups.”

Austin said JJHS students were able to raise around $8,000 for the meals through a school-wide cup sale, in addition to fundraising efforts organized by each eighth grade advisory class.

Before the students started packing the meals, they received an educational lesson about Feed My Starving Children, picked their roles and received training on how to pack the meals.

“The biggest part of service learning for us is that they are learning the educational piece behind Feed My Starving Children — why it’s important and how well a lot of us have it living here,” Austin said. “They get the entire background of why we’re doing this, how many meals we’re packing and how we’re able to serve other people.”

The district is in the early stages of creating a new strategic plan, but Pobst said the service learning initiative will continue. ”That’s a piece that we’re going to keep using in the future,” she said. 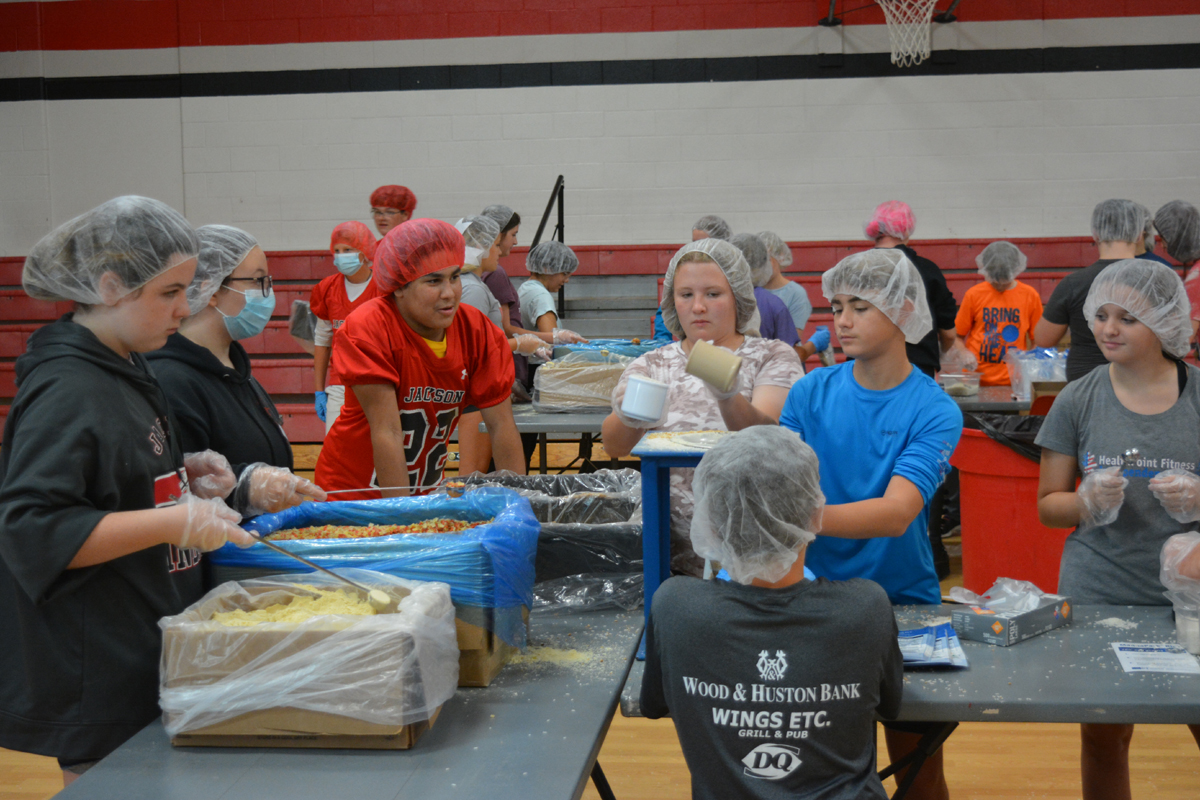 Each group of eighth graders trained and packed the Feed My Starving Children meals in a 90-minute session either Thursday or Friday.

While eighth graders participated in this service-learning event, seventh graders at JJHS will spend a day later this school year volunteering at various locations locally in Jackson. “We’ve tried to get a nice split of local volunteer work and branching out with Feed My Starving Children,” Austin said.

Austin said the school is partnering with various elementary schools in the district for the seventh grader’s Service Learning Day, as well as local nursing homes, the City of Jackson and local athletic groups. “We’re really trying to keep it more Jackson-based, so our kids get to serve in their actual community,” he said.

The school held its first Service Learning Day in September 2019 and planned to hold its first Feed My Starving Children event in April 2020. Because of COVID-19, the event was canceled and the school could not reschedule until this year.

Austin credits New McKendree and specifically Todd Rushing, who is the chairman of New McKendree’s Go Team mission group, for helping the school get this annual event started.

“It’s been a dream of mine and a whole bunch of people to do this,” Rushing said. “We’ve been working on this for about six years, and it really is a dream come true to get these kids in a position where they can learn more about serving. It’s not all about you or me – it’s about kids learning what it is to do something bigger than themselves.”

Rushing said they will learn where the meals are going after they have shipped, but Feed My Starving Children is currently helping with earthquake relief in Haiti. 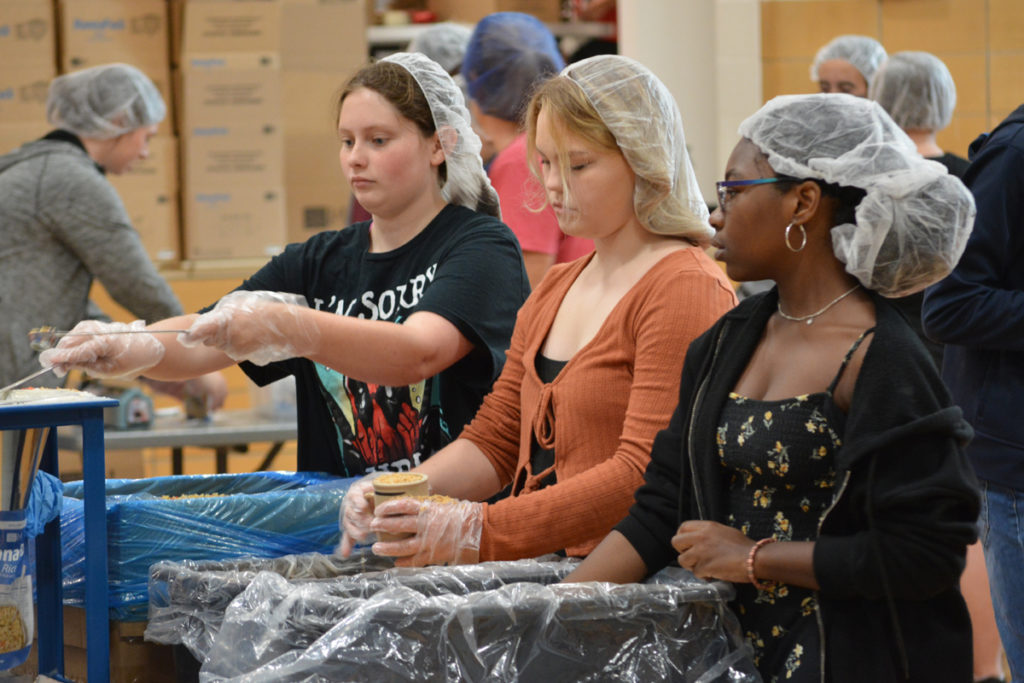 Each MannaPack meal includes white rice, various vitamins and minerals, soybean protein and dried vegetables. Each meal, which will be sent to children in need around the world, costs less than 25 cents.