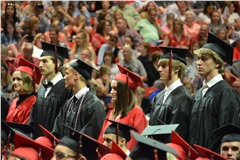 The Jackson High School Class of 2019 celebrated the end of their high school years and the start of the next phase of their lives on May 24 at the Show Me Center.

Many of the 353 graduates were recognized for academic achievements through honor cords, student leadership and previously unannounced local scholarships totaling $66,450. The top 10 percent of the senior class received the George Washington Carver Award from the State of Missouri for their accomplishments.

Alyssa Ramsey was given the perfect attendance award and Jessica Humphreys was honored for having near-perfect attendance. Ramsey didn’t miss any of the 692 days of school during her four years of high school.

In the class, 121 graduates successfully completed the A+ Scholarship Program, providing a combined 7,223 tutoring hours for the Jackson R-2 School District over the past four years.

An additional 13 graduates received a standing ovation for their commitment to join a military service after graduation.

The senior steering committee chose choir teacher Christy Shinn as the commencement speaker. Shinn, who graduated 26 years ago from Jackson, said she remembered one key phrase from her graduation that stayed with her – “Give me a place to stand and I will move the world.”

Shinn advised the graduates to “make each day your masterpiece,” as each day is precious. She said time is life and told the class to challenge themselves even when it is hard. Shinn spoke of her three miscarriages and thinking she would never be able to have children. She said she was crying thinking about her own struggles as the attack of Sept. 11, 2001, was shown on her television.

“I suddenly realized that there were bigger things than me and my grief in that moment,” Shinn said. “Perspective is everything.”

She said to embrace your obstacles, as they are not a dead end, but a detour. Shinn said she now has a beautiful family and three children, and that patience and perseverance got her through difficult times.

Shinn added that the class made a huge difference in her life, making her a better teacher and mother. “Each of you out there are all uniquely made and have awesome things to offer this world,” she said.

Shinn finished her speech telling the graduates that they are the authors of their own story, and they get to decide how to make their mark on the world.

After receiving their diploma, each graduate placed a flower on empty chairs in remembrance of Hailey Dacus and Broeden Gard, who would have graduated with this class but had previously passed away.