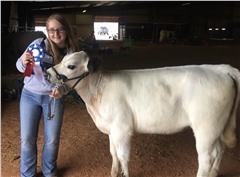 Peters, who comes from a multigenerational farming family, said she had shown horses and other types of livestock before but wanted to show cattle for FFA. When she saw the contest through a Facebook post, she knew she wanted to apply.

“I’ve always wanted to show cattle,” Peters said. “My dad has been around cattle for many years, so it’s kind of a family thing.”

The British White cattle breed is fairly rare in the United States, with a current national population of 2,000 cattle. Peters said she had done research before she even knew about the contest, and British White had been her favorite breed of cattle.

“The British White is a breed that was developed in Europe many years ago in the 17th and 16th centuries by English royalty,” Peters said. “They were developed as a cow that was easy to keep and that looked good in the front lawn.”

Peters said they are a relatively easy breed to take care of, being calm in nature and hardly ever getting diseases. She said it was because of this that the breed is perfect for kids starting to raise their own cattle.

The contest was a trial program by the British White national organization to help youth become more familiar with the cattle and help grow the population of the breed. The program was open to active 4-H and FFA members between nine and 15 years old. The applicants were judged based on an essay they wrote on how they would take care of the young cow and their future agricultural plans.

After high school, Peters plans on getting an agricultural degree and going into agriculture marketing and sales. She said that her ultimate goal is to “make a better world for agriculture.”

Sara Green, Jackson’s FFA advisor, said Peters has always gone the extra mile as a student, but was very impressed that Peters took on the challenge of applying to this national competition when she was only a freshman. She added that Peters has only grown more impressive as time has gone on.

“She was kind of shy and quiet last year, and she has just blossomed into this wonderful young lady,” Green said.

Peters was presented her heifer at the BWCAA National Show/Sale on Oct. 16 in Purcell, Oklahoma. There, she met the family who donated the seven-month-old female cow, who were from Florence, Alabama.

As part of the program, Peters will donate the heifer’s first calf, who will be given away to a future Heifer for Youth winner. After that time, the heifer will be fully Peters’.

The heifer, who is named Annabelle, has been settling in nicely in Jackson. Peters said she will be ready to start showing next year, when she is one year old.

“She definitely was hard getting haltered at first, but we’ve been working, and she’s been getting way better,” Peters said. “With cattle, you have to work them every day until they remember how to lead. She’s stubborn, but I do love her.”

Peters said one of the great things about the experience has been getting involved in the British White Organization. “It’s a network of really nice people,” Peters said. “I went down there knowing so little about showing cattle, and these people were so great about showing me what to do.”