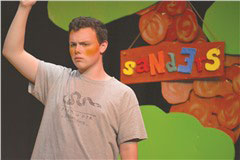 Jackson High School’s fall theater production will present a new take on the classic tales of Winnie the Pooh on Oct. 11-12 in the high school auditorium. Director Taylor Hamlett said the actors have all made the characters their own and production will not be an impression of the Disney adaptations.

“It’s a fresh take on the characters and I could not be any prouder of this cast,” Hamlett said. “The whole goal when auditions rolled around was to find students who were going to interpret these characters in a different way than what the majority of the audience is going to be used to.”

Neal Harrison, who plays Winnie the Pooh, said finding a fresh take on the character meant making the bear more like himself. “It might actually be typecasting,” Harrison said. “I’ve got the physique and that sort of thing down.”

Harrison said it has been a privilege to bring this character that he grew up with to life. “I get to know him on an even deeper level now that I’m performing him as an actor,” he said. “I can see his flaws, but I also see that he has a very good heart. I can relate to that.”

For others in the cast, like Avery Clubbs and Reyt Middleton, their roles required them to step out of their comfort zones. Clubbs said she had previously played motherly roles, so being cast as Eeyore was a surprise.

“Eeyore is a funny little dude,” Clubbs said. “He’s sad most of the time and I try to always be happy and bubbly, so trying to be this character was difficult.” Clubbs added that she had to remind herself to stop smiling when the cast visited local elementary students.

Middleton, who plays the strict and overbearing Owl, said he didn’t have a connection to the Winnie the Pooh characters before the show besides his grandmother having a stuffed Eeyore when he was young.

“I had very little experience with Winnie the Pooh as a child, so I actively don’t know exactly how Owl usually acts,” Middleton said, adding that he has been able to find the character by playing and changing things with the other cast members during rehearsals. “There has not been a single rehearsal that has been the same as last time,” he said.

“They are a unit and it is so fun to watch them,” Hamlett said. “Usually as a director you want them to keep it the exact same way, but they have so much fun up on that stage, and I have so much fun watching them.”

Hamlett added that it’s been fun to see every aspect of the show come together in these past few weeks, including a set designed by middle school fine arts teacher Nathan Kohm that Hamlett described as “a treat to see all by itself.”

“The entire set is made to look like toys,” Hamlett said. “The tree looks like it’s made out of Lincoln Logs and instead of having a rocking chair, we have these big, giant wooden letter boxes. Mr. Kohm and his set crew stepped up – it’s unreal.”

Hamlett said she wanted the production to emphasize the fact that these animals are Christopher Robin’s stuffed animals and the story is part of his imagination. The costumes show the stiches where the animals were filled with stuffing, and the show begins with Christopher (performed by Eli Clubbs) playing with toys that then become the set.

The story shows Pooh and his friends dealing with the arrival of the mysterious new animals Kanga and Roo (played by Allie Helle and Lilia Rushing) and the bathtub they have brought with them. “None of the animals have had a bath before and this is very scary for them,” Hamlett explained. When Piglet (played by Samantha Webb) gets taken by Kanga and Roo, Pooh and the rest of the group have to rescue him.

The cast is rounded out by Delaynie Spies as Rabbit, the narrator voice played by Zane Lintner and four of Rabbit’s family members played by Leighton Surface, Sam Helle, Paige Cooper and Rebekah Mansfield.

Hamlett said the entire cast has held on to the fact that this show is aimed at small children, and the responsibility of being the first show many in their audience will see.

“If I had the opportunity to see Winnie the Pooh, I would have loved it,” Clubbs said, saying she would have been star-struck seeing the characters in real life. “I want to make it to where these little kids have that experience where they see something they love or imagined come to life.”

Hamlett added that there aren’t a lot of opportunities for children to see theater aimed for them in this area. “Hopefully kids will get to experience the magic of it, and when they get to high school they will want to be involved with theater themselves,” she said.