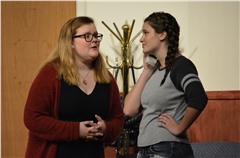 Jackson High School’s fall theater production, a female-centered The Odd Couple, focuses on two women who are vastly different, but are able to support each other when they most need it.

The female version of the play was adapted in 1985 by Neil Simon, who also wrote the original. This version turns Oscar and Felix into Olive and Florence, while retaining the same story line and basic character traits. JHS Theater Director Taylor Hamlett said the female version is a great fit for a high school cast and is a fresh take on the classic play.

“The big thing is that there’s that femininity to it,” Hamlett said. “I think both versions have a wonderful message, but I like the girl power anthem going on in the female version.”

The show centers on Olive Madison, played by Senior Ashlynn Henry, and Florence Unger, played by Junior Avery Clubbs. While Olive is messy and loud, Florence is a neat freak and quiet. When Florence gets kicked out of the house by her husband, she ends up living with the recently divorced Olive.

Hamlett said the comedy comes from the banter between the two women and the differences they have. One of the things she has been most impressed with by the cast is their grasp on the comedy throughout the play.

According to her, each of the eight students have found the comedy inherent in their characters. “The lines themselves lead to laughs, but to really take it over the top you have to have good delivery and timing,” Hamlett said. “The cast has really found the funny in each of those lines.”

Hamlett said 46 students auditioned for the play, which was much more than she expected. The cast also ended up having students from every grade level, including two freshmen.

Rounding out the cast are Abby Brees, Leigha Surface, Emma Wilson and Payton Weisbrod playing Olive and Florence’s friends who they play Triva Pursuit with, and Wyatt Dunning and Gio Mayfield-Wubbena playing the Costazuela brothers that go on a date with the leads later in the play.

Hamlett said the entire cast has work very hard over the past two months on the production, giving up their time and fully committing to the process. She added that each of the characters has their own quirks, and everyone who comes to the show someone to relate to.

“It’s so relatable,” Hamlett said. “We have times where we have to lean on other people and there are times when we have to be strong and lean on ourselves. I think that definitely resinates.”

Henry and Clubbs said they have become remarkably close throughout this process, saying they have leaned on each other similarly to their characters.

“This has really put us in a situation where we got to know each other and it’s really awesome how we’ve grown closer together,” Clubbs said. “It just makes me love her even more.”

Henry, who said she can related to her character’s passion and exuberance, believes the show about having a sense of self-respect but also knowing it is okay to lean on the other people in your life.

Clubbs added that they will also have a great time because of the comedy inherent in the show. “Everything is so funny,” Clubbs said. She especially thinks audiences will enjoy the date that the women go on later in the play. “It takes the Olive and Florence that you’ve seen this whole time, and it puts them into this new setting where they are awkward and channel back into the way that they knew how to flirt.”

The play will be held at 7 p.m. on Oct 25-26 at the Jackson High School Auditorium. Tickets are $5 and can be purchased at the box office the night of the show.