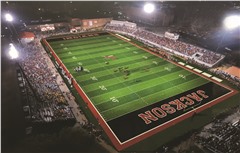 The bid from ATG Sports was significantly lower than the District’s estimates for the project. The project was estimated to cost $1.98 million in January, and the estimate was revised in February to $1.86 million. Superintendent Dr. John Link said the project would not have come in under budget if they did not go through the bidding process with Incite Design Studios.

“Last year one of the companies gave us a price and we could have done it, and we talked about it. We decided not to do it at the time, and it was a wise decision,” Link said. “Now we are able to do two fields for what we probably would have done one field for last year.”

Three other companies bid for the project, with ATG Sports being the lowest bidder by over $225,000. According to Link, ATG Sports made an aggressive bid for the project. Link said the company, located in Festus, had been in talks with the District for approximately six years about adding artificial turf and viewed the project as its to lose.

The bid also includes a base bid of $377,555, which covers concrete and dirt work, a drainage system for the turf, equipment for maintaining the turf and new football goal posts. There were also stabilization costs totaling $84,000 for both fields. If the soil beneath the field does not need much work, Link said there might be additional savings for the District.

Link said the only additional costs for the district will be storage for football field equipment, play clocks, continuing the new fencing around the field and new shrubs.

Because the bid was significantly lower than the estimates, the District is also moving forward with adding new scoreboards to the football field. The School Board approved upgrading to a video scoreboard where the current scoreboard is, and adding an additional LED scoreboard on the other end of the field.

Including the scoreboards, the project will cost $1.6 million. The two new scoreboards will cost $200,000 combined, and the Board approved an additional $50,000 to replace the sound system at the field.

“Being able to do the turf with $1.3 million opened the door for doing the video board, the other board and sound,” Link said.

The District has initial renderings of what the fields and scoreboards could look like, but haven’t finalized the plans yet. The District is currently deciding where to put the J-Spear on the football field, whether to have black or red endzones, where on the field it should say “The Pit” and if they want red shadows behind the numbers.

On the soccer field, the District has already decided to have a J-Spear as the center field logo, but will need to decide on the thickness of the turf and how the turf is intertwined. Unlike football fields, soccer fields can have various fiber types which affect how the ball rolls on the field. The coaching staff traveled to St. Louis on March 28 to get a better feel for the options.

The video scoreboard the District is considering will be able to show playback footage as well as footage from the sidelines and of special presentations on the field. It was also suggested at the Board meeting that students in communication classes might film during games for the scoreboard.

Preliminary work for the fields has already started, with the football field scheduled to be completed in the middle of June. The soccer field and football scoreboards should also be installed before games start in the fall.

Link added that the turf fields shouldn’t need to be replaced for 10-12 years, and the shock pads will last even longer.