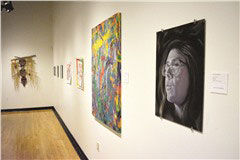 Mansell said she was honored to have her artwork in the exhibition, especially after she was able to see the other pieces in the exhibit. Over 500 entries were submitted for the exhibit, but only 106 were chosen to be displayed.

Her first-place pastel drawing, “Local Serenity,” was based on a photo she captured of her friend Gigi Merideth at Jackson Homecomers. The photo showed the reflection of light from the Scrambler ride in Merideth’s glasses.

“The lights of homecomers made her appear blue and purple,” Mansell said. “I was able to capture and saturate the colors with pastel pencils.” She added that the exhibit pushed her to be very detailed and precise with her work.

Mansell also had an acrylic painting in the exhibit titled “Stan” that is based on her dad’s friend.

“This experience has helped me work hard and see results,” Mansell said. “I don’t think I would’ve spent nearly as much time on my pastel as I did if I hadn’t had the goal of getting into the symposium.”

Steinhilber, who won the printmaking award for her piece “Gallery Thoughts,” said having her art shown in a gallery is amazing. “It feels good to have my hard work be presented to people along with many other great artists in the area,” she said.

Her award-winning piece was her first attempt  at printmaking and was about the time she spent with her boyfriend looking at Kansas City. She added that while her boyfriend is illustrated in the foreground, the art shown in the background is her own illustrations displayed in frames seen at the gallery they visited.

Her second attempt at printmaking, “Seed of Death,” was also chosen for the exhibit and received an honorable mention. Steinhilber explained that for these pieces, she first had to carve the image she wanted out of a block of linoleum.

“If there are multiple colors, you carve one color at a time and lay ink on top of the linoleum and press on paper,” she said. “You do this with each color until it is done.”

“Receiving the Scholastic Gold Key Award was unreal – especially being so unexperienced in the printmaking world,” Steinhilber said. “I feel grateful receiving these awards and can’t wait to pursue this in my future.

Jackson art teacher Andrea Talley said she is proud of these students, all of whom are in Advanced Placement Art. Talley added that it is extremely difficult for these students to have the time to enter competitions on top of their AP work. “These students are hardworking and very committed to their art,” she said.

In addition to his first-place sculpture award, Notre Dame Regional High School student Bryson Kielhofner received the third place photography award for his photo, “Down by the River Wall.”

The exhibit will be on display through March 15, in the Rosemary Berkel and Harry L. Crisp II Museum at Southeast’s River Campus. Admission is free.