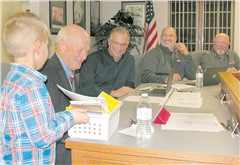 Voters going to the polls April 7 will decide upon Jackson R-2’s request for a $22 million bond issue to make improvement to several schools.

If approved, the real estate and personal property tax rate for residents within the School District will remain unchanged at $0.3708 per hundred dollars assessed valuation.

The Board voted to put the bond issue request on the ballot at its Jan. 10 meeting.

• Board honored: The Board of Education was thanked as part of School Board Appreciation Week.

“Thank you from the bottom of our hearts from the schools and the community,” began Jackson R-2 Superintendent Dr. John Link.

“You guys are giving lots of [your] time,” said Gordonville Kindergarten Teacher Mendi McDowell, who gave Board members gift cards from the Community Teachers Association (CTA). She also commented on the new windows installed at her school. “Come see our new windows; they’re so pretty” she said. During the high winds last week, no wind whistled through the new windows, she said.

South Elementary Principal Jessica Maxwell introduced a video of Elizabeth Hah’s fourth-grade class singing an original song of thanks to the Board to the tune of “America the Beautiful.”

Mason Diebold, Caroline Brazel and Olen Byrd, students from Rhonda Farrow’s first grade class at East Elementary, read their original notes of thanks and presented Board members with gift baskets from East Elementary.

In the past four months, 104 students from grades 9-12 were randomly selected to be tested. Of those students, nine were selected twice (because the selection was random.)

As a result of the testing, seven samples were sent to a lab to be retested. Six of those came back showing medication that the students were prescribed.

The average time out of class to be tested was 15 minutes. Three to five students were tested at a time. No phone calls or e-mails from teachers have been received complaining about students being taken out of class, indicating their agreement with the policy. “Everyone’s on board,” Martin said.

The purpose of the policy is not to catch and punish drug abusers. “By having this policy in place, it gives our students another opportunity to say No [to drugs],” Martin said. “I believe it’s making a difference in our students’ lives.”

• New sports: Martin also said the high school may add  a new sport or two. Currently there are 18 or 19 sports: the boys have nine and the girls have nine plus dance. (The Missouri State High School Activities Association considers dance a sport although Martin does not.)

MSHSAA requires that the number of boys and girls sports must be within one. If JHS wished to add a girls sport, it would have to add a boys sport as well to keep it within one.

Parents have requested that JHS add girls golf (in the fall, which already has seven sports) and boys tennis (in the spring, which has four sports now).

The only school in the area that has girls golf is Notre Dame. The Notre Dame team has played Ste. Genevieve, Farmington and some Illinois schools for a total of 11-14 matches, plus District and State playoffs.

Martin plans to have JHS advisory teachers talk to their students to see if there is student interest in these sports. Also students in grades 7-9 will be polled.

Board Member Bruce Thomas asked if these sports would be added next year. “I think we could get it done,” Martin replied.

Martin was asked to report back to the Board regarding student interest at the Feb. 14 Board meeting.

• Pepsi agreement: The Board approved a 10-year extension to the contract with Pepsi to provide beverages to the District. Pepsi will donate $40,000 up front to improve score boards at the soccer, baseball and softball fields.

• Program evaluations: the Board approved program evaluations for homeless, migrant and ESOL (English for Speakers of Other Language) students. Currently there are 88 homeless, zero migrant and 15 ESOL students. Homeless students are not all living out of cars. This number includes students sharing housing with others due to loss of housing, economic hardship, etc.; living in motels, trailer parks or campgrounds; awaiting foster care; living in transitional shelters; etc.

• Enrollment: Jackson R-2 Superintendent Dr. John Link updated the Board on enrollment figures. The District has 113 more students than it did a year ago, and it has 60 new students with disabilities.

“Our goal is to get our classrooms under 25 students,” Link said. Last year there were 12 classrooms with 25+ students; this year there are eight. If the bond issue passes, class sizes can be reduced without adding teachers, he said.

Second grade has four of the eight classrooms with 25+ students. It is difficult to plan for second grade because families move into the District with second-graders.

• District improvements: Link said a concrete pad has been poured for bleachers at the track. Meanwhile, $40,000 in improvements are planned for the softball field. “We hope to have bleachers and a press box by the time softball comes around. With Pepsi’s help, we’ll put in a new score board.” The new windows at Gordonville are keeping out the wind. And on Jan. 21, the District hopes to receive final word about being approved for the FEMA safe room at West Lane.

• Next meeting: The Jackson R-2 Board of Education meets regularly for open session at 7 p.m. on the second Tuesday of each month at 614 E. Adams, Jackson. The next meeting is scheduled for Tuesday, Feb. 14.