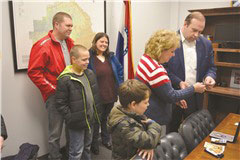 His daughter, Gena Welker, said she knew about him being awarded the Purple Heart because he had been shot twice and stayed at a hospital overseas before coming back home.

She added that her father may not have known about receiving the other medals.

“He was the kind of person who never wanted any glory or attention for what he did,” Welker said.

Smith said it was not uncommon for WWII veterans to not receive all the medals they were awarded. He said he has been able to present medals to several veterans who hadn’t received them previously.