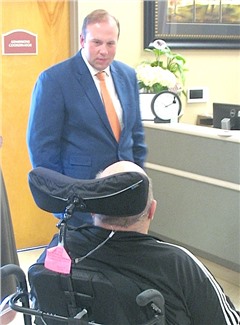 One hundred years ago this Sunday, World War I — “the Great War” — came to an end. Originally called “Armistice Day,”  Nov. 11 is now Veterans Day, and is a day to honor all veterans.

Area veterans were honored this past week, and ceremonies are planned for Sunday and Monday as we mark this 100th anniversary. Notice what it was like for the war to come to an end:

America’s W.W. I war hero, Eddie Rickenbacker, an ace pilot with 26 kills to his credit, was in a mess hall in France when he heard the news. He had scored his last two victories on Oct. 30, 1918, shooting down a German Fokker and an observation balloon.

“On Nov. 10, the mess phone rang, and as Eddie answered the room went quiet. Captain Mitchell of the 95th verily shouted into the receiver that the war would officially end the following day at 11:00 a.m. Eddie dropped the phone and paused, the men around him aware of something momentous. Antiaircraft guns went off. Pandemonium broke loose as the pilots tumbled out the door, grabbing pistols, flares, and whatever made light or noise, blazing them away into the sky now crisscrossed with searchlights and filled with the glare of rockets and flares, all punctuated by machine-gun fire. Released suddenly from the immense pressure of daily death, the men yelled, whooped, and laughed riotously.

“At the sight of some of his pilots rolling gas containers out onto the field, Eddie, instead of ordering them to stop (which would have been in vain), helped push them himself, and then lighted the pyre of war. ‘A dancing ring of crazy lunatics joined hands and circled around the blazing pyre, similar howling and revolving circuses surrounding several other burning tanks,’ he later recalled. One ace shrieked, ‘We won’t be shot at anymore!’

“The next morning, although thick fog clung tenaciously to the earth and flights near the front were prohibited, Eddie took off anyway at 10:40 a.m. so that he could be in the air when fighting stopped at 11:00. He flew at treetop level to Verdun, using a road as guidance. Just minutes before the appointed hour, he turned his SPAD toward German-held territory and fired until emptying his magazines. It seemed that both sides were furiously sending off their last salvos. Then sudden quiet fell, followed in moments by a rising chorus of cheering from both sides of the line. Below him he saw Americans leaping from their no-longer-necessary trenches. Not long after, German soldiers scrambled out to join the Americans.

“Eddie was surprised to wake ‘up to the realization that the war had ended, leaving me hale and hearty and America’s ace of aces.’ Under such relentless attrition, no one had been able to take staying alive for granted” (Enduring Courage: Ace Pilot Eddie Rickenbacker and Dawn of the Age of Speed by John F. Ross, 2014, pp. 268-269).

On Friday, Nov. 2, U.S. Rep. Jason Smith visited the Missouri Veterans Home in Cape Girardeau. After a “meet-and-greet,” he toured the facility, which received an $8.7 million grant for renovations and improvements.

During Smith’s visit, the Cape Girardeau City Mascot Playmo arrived and gave candy to the veterans. Excess Halloween candy was collected at the Osage Centre for this purpose.

Fourth-graders from East Elementary School in Jackson then arrived to interact with the veterans. They interviewed some of them, made a thumbprint flag and created a ring-link chain.

On Sunday, there will be a rededication of the Avenue of Flags and a dedication of the Veterans Memorial Plaza. A Bermuda blue granite wall with names of veterans from Cape County is expected to be completed in time for the ceremony. The Jerry Ford Patriotic Band will play at 12:30 p.m. and the ceremony will begin at 1 p.m.

On Monday, there is a Veterans Day program in the Jackson High School Auditorium at 9 a.m., followed by a reception in the band room.

Also on Monday, at the Jackson Middle School, there will be a Veterans Day program at 1 p.m., followed by refreshments donated by SoutheastHEALTH. Veterans (and the public) are invited to attend these programs.
The elementary schools in Jackson may also be having Veterans Day programs or activities, but they are not open to the public.