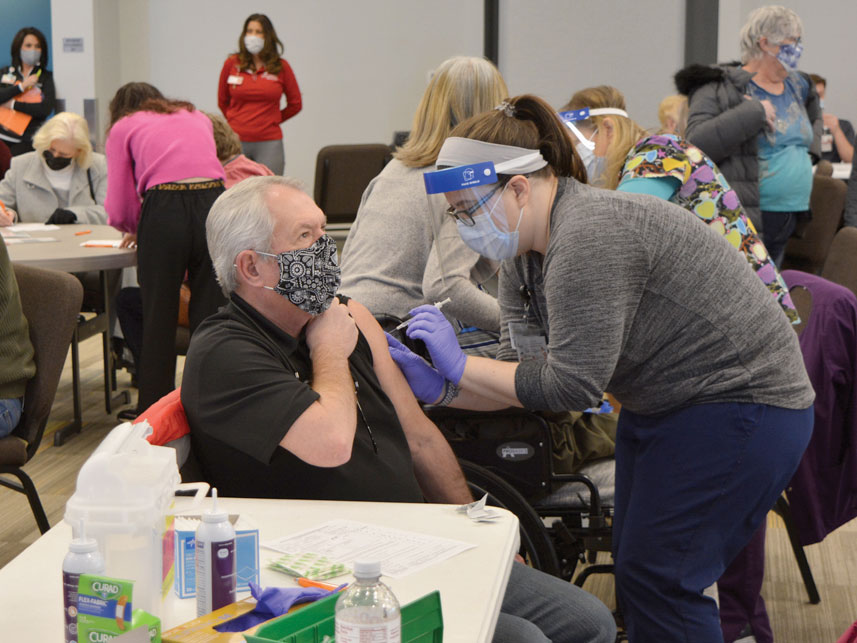 “We have been receiving a significantly less amount of vaccine for the last three weeks than previously,” Russell said during the public health center’s board meeting on March 23. “As a consequence our vaccine rate, as in the total number of vaccines that have been administered, has gone down.”

Currently, Cape Girardeau County has administered more than 34,500 COVID-19 vaccine doses to residents and 26.7 percent of the county’s population has received at least one dose of a COVID-19 vaccine.

Cape Girardeau County is still above the state’s average of 24.5 percent of the population who has received their first vaccination, but it is below the national average of 28.6 percent.

“What has been aggravating as a public health-oriented physician is that if we continued to receive the vaccine at the rate that we had previously, our vaccination numbers would have continued to grow,” Russell said.

He said the change in vaccine distribution was made mid-March, to help more urban areas of the state increase their vaccination rate.  Russell added that urban areas were falling behind, with some residents having to travel across the state to find open vaccine appointments. “It is very clear that folks in St. Louis County and St. Charles County have been going to Cape Girardeau to get their vaccines,” he said.

Locally, Russell said some of the county’s early success in vaccinations was due to the county’s efforts to make sure that unused vaccines were redistributed and not wasted.

“One of the reasons why we’ve done better than some of the major metropolitan areas is that the level of local coordination among people receiving vaccine here has been much better than it is in some other parts of the state,” Russell said.

Russell pointed out that he remains optimistic that the region will start to receive more vaccines in the coming weeks. “There is significantly increased amounts of supply at the federal level that will be distributed throughout the state,” he said. “What I am hopeful of is a rising tide raises all boats.”

He said that even if the state’s vaccine distribution formula remains unchanged, the increase of vaccines should allow the region to be able to vaccinate more people.

Phase two of Missouri’s COVID-19 Vaccination Plan opened on Monday, extending COVID-19 vaccine eligibility to approximately 880,000 Missourians. In total, about 1.5 million out of the 3.9 million adult Missourians now eligible to receive a COVID-19 vaccine have received an initial vaccine dose.

All adult Missourians will be eligible to receive CO-VID-19 vaccines on April 9, when phase three of the state’s plan is activated. Russell said this was slightly unexpected, as state officials were saying it would be 45 days before phase two was activated, and there was “no date in sight” for when vaccines would be open for the general population.

“I think the Biden administration, with their announcement of trying to make sure that everybody had access to the vaccine by May 1, is kind of putting a kink in the state’s planned phasing rollout,” Russell said. He added that he is happy the vaccine eligibility has expanded, as it is one of the best ways to stop community spread of COVID-19 and its variants.

“I don’t care who gets it, I don’t care where they get it and I really don’t care which of the three vaccines they get,” Russell said. “Just get a vaccine in their arm, becausethat will kill the transmissibility of the variants and keep us from having reinfection spread.”

Russell added that while the general population will soon be eligible, they might still have a hard time getting a vaccine immediately. “The reality is that there’s still going to be a vaccine shortage. And not everybody that wants a vaccine today will be able to get a vaccine today.”

Public Health Center Director Jane Wernsman added that the vaccine distribution will probably also switch focus to make sure everyone is able to receive the vaccine.

“In the future weeks, those large mass vaccination clinics may not be the ideal approach to reach all of those target populations that we need to reach; those who aren’t getting vaccinated right now,” Wernsman said.

Those target populations include those who were unable to travel to get to a mass vaccination site due to socioeconomic status or physical ability.