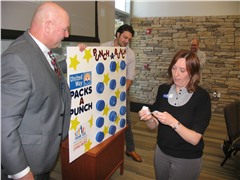 The United Way of Southeast Missouri thanked its volunteers at a celebration luncheon April 12. If volunteer hours were tallied up, “we’d be rich beyond measure,” said Executive Director Elizabeth Shelton.

“You are surrounded by people who care about Southeast Missouri,” she told those gathered at the Jackson Civic Center.

“Ninety-nine cents of every dollar donated are invested right back into our community,” she added.

Shelton thanked First Missouri State Bank for sponsoring the luncheon, and the gold, silver and bronze corporate investors for their contributions. Jay and Gunnar Knudt-son were thanked for being the 2017 campaign co-chairs.

“Part of the reason I decided to do this was to do something with my son,” said Jay. All kidding aside, he added that the reason “why we do what we do is to make our community better. United Way is a wonderful organization.”

Shelton discussed the upcoming United Days of Caring April 27-28. “It’s open to any organization that needs help,” she said. Organizations needing help and people who want to volunteer to help can sign up at the website www.united-wayofsemo.org/UDOC.

Jennifer Streiler, former Perry County case manager with Catholic Charities, discussed working with victims whose homes were hit by the Perryville tornado Feb. 28, 2017. “The United Way was an exemplary partner to the long term recovery team,” she said. “It is still working with us 14 months later.”

Streiler said there were 80 families whose homes suffered damage or were totally destroyed. They were broken down into three groups. The first group lost everything; they couldn’t even find their personal items. The second group lost their homes and some items; they had to determine what was salvageable. The third group thought their homes survived the tornado, but they called their insurance companies, who called in structural engineers and they were told their homes were unsafe and had to come down.

“The majority have recovered,” Streiler said. “There are a half dozen still waiting to get into their homes.”

She said Perryville people tend to be self-reliant and don’t like asking for help. But eventually, they needed help. “Everyone got to the point where they accepted some help. The people were so thankful and surprised to receive financial help,” Streiler said.

Kristin Funderburk, community relations manager for United Way, presented the Spirit of Partnership Award to Element 74 for its work redesigning the website.

The FUNdraiser Award went to Cape Girardeau Public Schools for organizing fundraisers that were fun.

Shelton presented the 2017 Volunteer of the Year award to Brandy McIntire of KBSI Fox-23, who had been a member of the Ambassador Committee.

Prizes were given to step-up donors who were randomly selected from more than 700 individuals who gave $1 a week or more for the first time, or who stepped up their previous year’s donation by $1 a week or more.

This year’s campaign will kickoff Aug. 23.