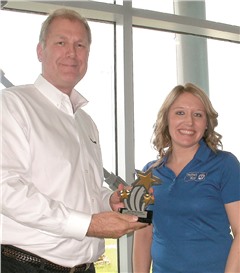 More than $800,000 in pledges have been collected by the United Way of Southeast Missouri in its 2015 fundraising campaign. That number will continue to grow as the final campaign figures dribble in.

“We’re excited about that amount. We’re excited about moving that number up,” said Executive Director Elizabeth Shelton at a celebration April 14 to thank volunteers, donors and staff members. Shelton said she was “even more excited” about the changes those funds can make when put to use in the community.

After Shelton thanked the sponsors, donors and media outlets for their contributions, Board of Directors President Donna Denson added, “We want to thank our very many volunteers who give one of the most precious resources we have, which is time.”

The Fran Rediger Award of Excellence was presented to Carolyn Ford Bock for her volunteer work in Read to Succeed.

The Spirit of Caring Award was presented to Big Brothers, Big Sisters, for promoting, supporting and embracing United Way’s work.

Nicholle Hinkle, director of donor relations, said 84 percent of money raised during a campaign comes from companies and organizations (and their employees). She presented the Spirit of Community Award to 1st Midwest Bank.

Gift certificates were awarded to 20 people whose names were drawn from among those who qualified for step-up challenge prizes by adding at least $1 a week to their pledges.