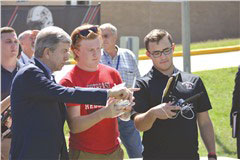 Southeast was the first in Missouri to have a bachelor’s
program focusing on drone technology when the university approved the program
in 2016. The degree, which was offered starting in the fall of 2017, was one of
University President Carlos Vargas’ first initiatives at Southeast.

“I’ve talked to Dr. Vargas about this program since he began
to think about doing it,” Blunt said. “At the time, I was chairing the aviation
subcommittee in the Senate, and clearly there is a market here for trained
people who are going to be out there in the world of autonomous aircraft.”

He called drones “a wave of the future,” saying unmanned
aircraft are able to do tasks, particularly in agriculture, that were
previously done in more expensive ways or were impossible to do.

Dr. Brad Deken, chairman of the Department of Engineering
and Technology, led a tour of the Seabaugh Polytech Building with several
students showing the senator what they were working on.

Southeast students Nathan McKiln and Brigham Haase, both
seniors in the UAS program, showed Blunt how they operate the drones and
assisted him when he flew one himself.

“It’s a great thing for the university to be a part of,”
Blunt said. “I think aviation generally would be a great door to open at a
university today, because so many pilots are retiring. There is a shortage of
pilots and technicians and airline mechanics – but the new door that’s been
open, and opens wider every single day, is in this kind of aircraft sometimes
referred to as drones.”