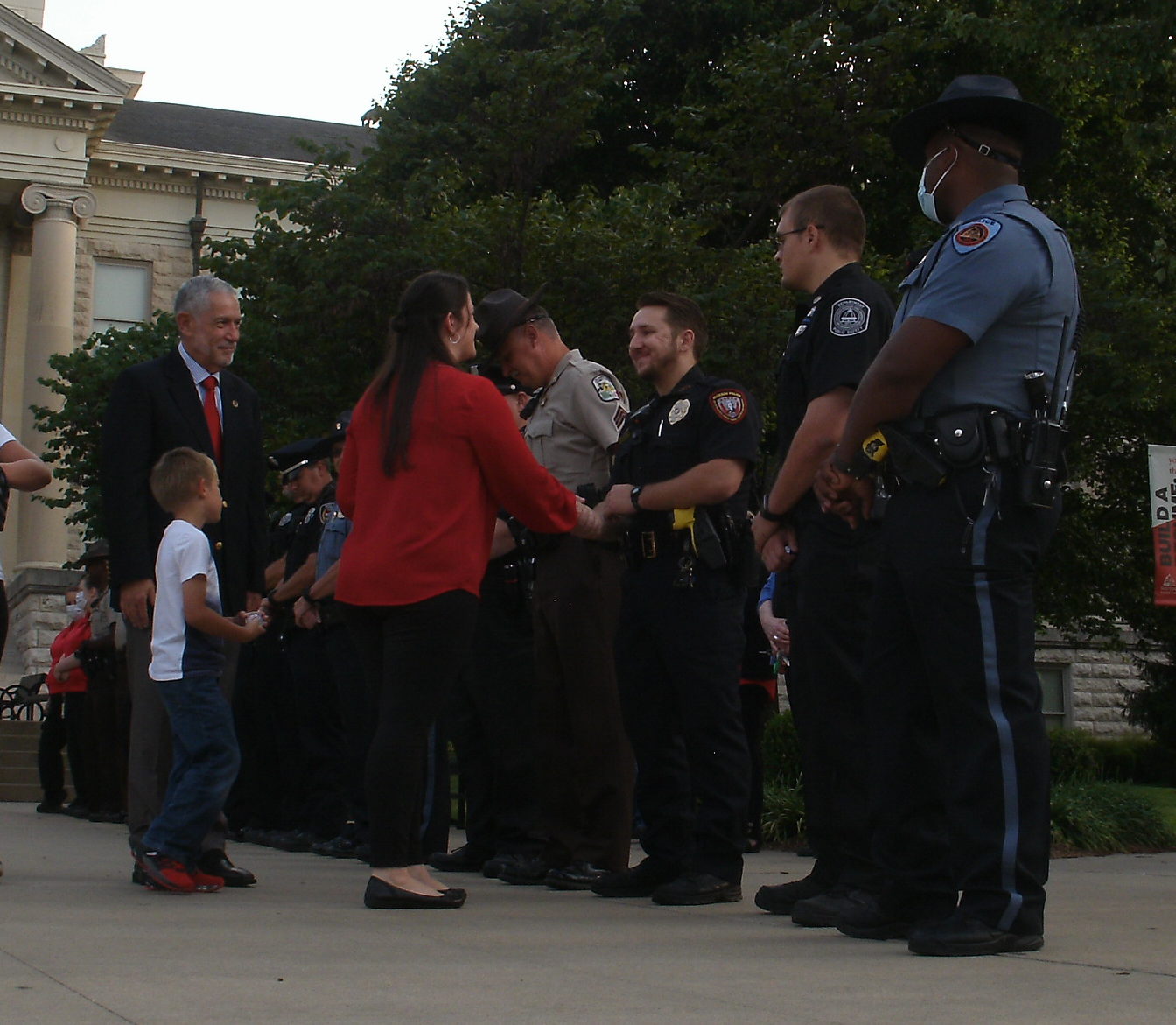 A 20th-year commemoration ceremony was held to remember those who died during the terrorist attacks of Sept. 11, 2001, and to honor today’s military and first responders.

The lawn in front of Academic Hall was decorated with 2,977 small American flags, each one representing a life lost in those terrorist attacks. They had been placed on the lawn by students and staff, the Office of Military and Veterans Services and Show-Me Gold and Air Force ROTC Detachment 205 cadets.

First responders from various local agencies stood in a long line facing the large flagpole on the front lawn. They saluted as the Southeast Show Band began the ceremony by performing “The Star-Spangled Banner.”

Show-Me Gold program participants and Air Force ROTC cadets lowered the flag to half-staff as “Taps” was played. A moment of silence followed.

Amanda Woods, Military and Veterans Services officer, welcomed everyone to the ceremony, and Dr. Carlos Vargas, president of the university, gave a short address stressing the need for national unity like the unity Americans felt following the attacks 20 years ago.

Local law enforcement, firefighters, medical first responders and military personnel were honored with a special recognition at the conclusion of the ceremony. Woods and Vargas presented military challenge coins to them.

Military challenge coins date back to World War I, Woods explained. Pilots carried coins stamped with the insignia of their squadrons.

One American pilot, who was shot down by the Germans behind enemy lines, was captured by the French army. When the French soldiers saw his challenge coin, they realized he was an American and an ally; the coin saved his life.

Now, military challenge coins are presented in recognition of great service to those who go above and beyond.

The front of the coin bears the logo of the Office of Military and Veterans Services — a Redhawk image in front of an American flag.

The back of the coin has representations of the four terrorist targets—the Twin Towers, the Pentagon, and a “93” for United Airlines flight 93 that crashed near Shanksville, PA, when passengers overpowered the terrorist hijackers. The back of the coin also has symbols representing the police, fire, emergency medical services and the military.

The ceremony was an effort by the University community to ensure that Americans never forget the fallen, first responders and military members who sacrificed their time and lives due to the terrorist attacks.

This year’s 20th Year commemoration included a “Heroes Challenge” at the Student Recreation Center Sept. 9-10. Participants attempted to climb 1,920 steps, the equivalent to the number of steps firemen climbed during rescue attempts in the stairwells of the 110-story Twin Towers before they collapsed.