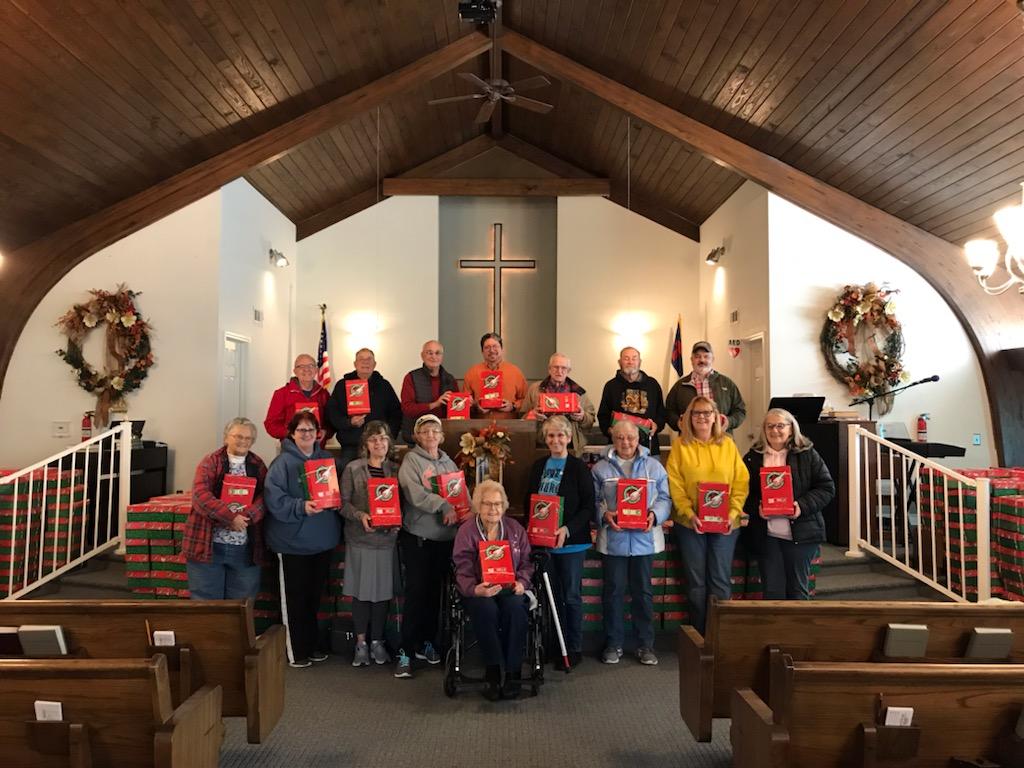 Volunteers each hold a shoebox as they came together Nov. 16 to load the shoeboxes onto a truck to begin their journey from Delta to needy children overseas. Submitted photo

Members of a small church in a small town have shown they have a big heart. The First Baptist Church of Delta may have anywhere from 70 to 90 people who attend services on Sunday morning, but the congregation pulled together to fill almost 800 shoeboxes for Samaritan’s Purse Operation Christmas Child.

The shoeboxes are marked on the outside so the contents will be appropriate for boys or girls in three different age groups. Inside each shoebox are items that have been collected all year, including personal hygiene items, school supplies, footwear, clothing and toys.

The church had a packing party a couple of weeks ago, and about half the congregation came out to fill the shoeboxes with the items that been collected all year. The volunteers came and went throughout the day, but about 25 were there at any one time, said Retha McManus, the coordinator of the project. “They call me the boss, but I’m not,” she said with a smile.

On Tuesday, Nov. 16, volunteers again gathered at the church to load the shoeboxes onto a truck to begin their journey to needy children. They were first sent to Advance, and from there they travel to Tennessee, to a central distribution point. After that, the shoeboxes will be sent overseas to Africa or Central America, McManus said.

“The final count was 792 shoeboxes,” stated Pastor Randy Conn. “The entire church family helps in one way or another. Some give financially, some donate items, some fold the boxes, some pack and load and transport the boxes to the collection center in Advance.”

All year long, church members have collected items to put in the boxes.

“We have a list of items and we divided the list up into 12 months,” said McManus. Once a month, a part of the list is printed in the church bulletin, stating what items to donate that month. For example, toys are on the list in December, because they are on sale at that time for Christmas.

This year’s collection set a record for the church.

The church began collecting items for shoeboxes back in 2004, after McManus saw an article in the newspaper about Samaritan’s Purse Operation Christmas Child. “I saw a write-up in the paper,” said McManus, who then decided to make it a church project. “We collected 17 boxes that first year. And five of them were mine. I was so disappointed,” she said.

“I kept aggravating people,” she said, and the project grew year by year.

By January 2017, when Pastor Conn and his wife came to First Baptist church of Delta, about 300 were collected, Conn said.

When McManus said she’d like to see the number grow to 600 or 700 before she died, “they thought I had lost my mind,” McManus recalled.

The goal for next year is 800 shoeboxes.

“Each box will share the greatest gift ever given (Jesus) with seven to 10 people,” agreed Conn. “We do this ministry to share Christ, not just give toys.”