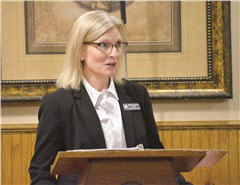 Dickerson, who spoke first, said she has over 35 years of law enforcement experience and has been a lifelong resident of the county. “My roots run deep right here in Cape Girardeau County,” she said.

In August 2018, Dickerson was appointed as sheriff and later that year in November, she ran and was elected sheriff. She said that in her 18 months as sheriff, she has been able to continue the traditions of the office and further cooperative relations with area law enforcement and fire protection agencies.

“Cooperative working relationships with other agencies is paramount in today’s society,” Dickerson said. “Sharing resources together is critically important and I’ve work diligently to increase the cooperative efforts among all our law enforcement agencies and our citizenry as well.”

Dickerson talked about the completion of a 14-month project that will combine 911 dispatching between the county and the City of Jackson. In addition, she is working with the cities to make sure they have shared communication lines with the sheriff’s office.

She spoke about her time coming up the ranks and working with her mentors, former sheriffs Norman Copeland and John Jordan. She started work with the county as a clerk, before working in the jail, with the courts, as a dispatcher and as a patrol officer.

“I have worked my way through the ranks of being a sergeant to a lieutenant to the last 28 years serving for John Jordan as the captain of his business operations and then I became second in command,” Dickerson said.

She added that her variety of experience is an asset to her work now. “I consider my best attribute is being a team player because of my willingness to take whatever assignment I was given throughout the years,” Dickerson said. “I gave it my best to learn everything I could about each division, about law enforcement and about the sheriff’s office as a whole.”

Dickerson said she then used that knowledge and now leads by example. She told a story about a younger officer not wanting to pick up trash where inmates would be transferred, saying it wasn’t his job. Dickerson then told him how the trash could be a safety concern, so they cleaned it up together. “That officer is still with us today, and we still tease each other about picking up the trash,” she said.

“I went up through the ranks,” Juden said. “I did every job that there was to do.”

In 2001, he was promoted to chief after being a captain. Juden said when he took over, the department was in shambles. “I spent the next several years rebuilding that department,” Juden said. “I loved that job, and then I got an opportunity of a lifetime.”

In 2016, Juden was asked by then-governor Eric Greitens to lead the Missouri Department of Public Safety. Greitens resigned in 2018 amid campaign and sexual misconduct allegations.

After Juden left office, a report from Missouri Auditor Nicole Galloway was released in July 2019 that raised concerns about how Juden awarded and managed a state contract, as well as how he didn’t take any personal leave despite the appearance that he had.

Juden said “it was a shame the way that all ended,” and was later asked to explain how his time in Jefferson City ended.

“I had the opportunity to work for an outstanding and wonderful governor who basically got railroaded and run out of Jeff City, and when he left, I stayed,” Juden said. “I got a call from our current governor, Governor (Mi-chael) Parson, who said, ‘Hey, we’ve got a great cabinet. I think Eric Greitens put together a great cabinet, and we want you to stay on board.’”

Juden said 90 days later, he was told to resign. When Juden said he wouldn’t, he was fired. “It’s a shame because we were doing a lot of good stuff.” Juden said during his tenure, the department of public safety had become more proactive and that his work has now been reverted back to being a reactive response.

“I was honored and privileged to serve,” Juden said. “I did the very best job I could do while I was there.”

Juden said he is running for sheriff to improve relationships with the other public safety agencies in the county, improve the efficiency of the office and work with other county officials to get the $600,000 the state currently owes the county.

He added that there should be more involvement between the sheriff’s office and local community members. “I think every citizen in the county should know who the sheriff is and not be afraid to approach the sheriff,” Juden said.

Juden said he would put deputies in the City of Cape Girardeau to curb street violence and have sheriff office personnel go to every rural fire in the county.