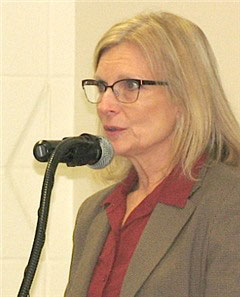 Cape Girardeau County Sheriff Ruth Ann Dickerson has announced that she will run for re-election.
Dickerson made her announcement last Wednesday at the Concourse in Cape Girardeau, surrounded by more than 80 supporters.

“It has been my pleasure knowing and working with Ruth Ann for nearly 40 years now,” said Larry Ferrell, a former Cape County and federal prosecutor, who serves as treasurer of her campaign. “I can tell you without a question the very best person we can have as sheriff of Cape Girardeau County is the person who holds that office today: Sheriff Ruth Ann Dickerson.”

Ferrell called Dickerson “the backbone” of the Sheriff’s Office under former sheriffs Norm Copeland and John Jordan. When Jordan resigned in 2018 to accept an appointment as a federal marshal, Dickerson was appointed by the County Commission on Aug. 18 to take over as interim sheriff. She ran unopposed for the office in November of that year.

“Sheriff Dickerson has done an astounding job as sheriff since the day she was first appointed,” continued Ferrell. “Sheriff Dickerson — and this is to her credit — is not a politician. What she is, and what she always has been, is a dedicated and loyal servant of the people of Cape Girardeau County for nearly 40 years.”

“I am 100 percent dedicated to the people of CapeGirardeau County,” Dickerson said. “It has always been my home.” She was born and raised here, attended school here and married her high school sweetheart. Her children and grandchildren live here. “My roots are deep right here in Cape Girardeau County,” she said.

Dickerson spoke of her work building cooperative relationships. The Sheriff’s Office is getting ready to complete a 14-month-long project of combining 911 dispatch with the City of Jackson, saving money for both the County and the City. As the City of Cape Girardeau upgraded its emergency communication system, a partnership with the County made sure there were shared channels so all officers can communicate with each other. Today, county deputies cannot talk to Jackson police officers over their radios. “We are going to fix that,” she promised. The new system will also communicate on state and federal levels if there is a major incident here.

A Central Square Software system was secured with a $500,000 grant by Dickerson. That software will be shared by the County, City of Cape and City of Jackson.

In the future, the County Sheriff’s Office hopes to send out emergency alerts to senior citizens and to all citizens.

“One of the greatest responsibilities of the sheriff is to manage and maintain the county jail. On any given day, that county jail that you drive past in Jackson, is housing 220, sometimes as high as 285 inmates,” said Dickerson. “I am proud to say that in the last 18 months as sheriff, we have not had one major incident in that jail.” She attributes it to her creating the position of a jail safety and criminal investigator, who prosecutes any crimes committed while in jail. This has reduced misconduct by inmates.

Dickerson thanked those she works with and her supporters who came out on a rainy night. “Don’t forget to vote Aug. 4,” she concluded.