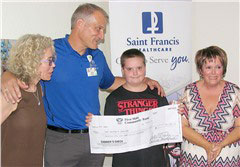 “It’s hard to be healthy if you don’t have someplace to live,” said
Jimmy Wilferth, vice president – Foundation and Marketing for Saint Francis at
a “home warming” party at a house in Cape Girardeau that will soon be home to
four homeless men.

When a homeless man named Jerry kept showing up at Saint Francis
Medical Center for medical care, it was realized that in order to stay healthy,
he needed a home, said Saint Francis President and CEO Maryann Reese. If Jerry
continued to live under a bridge, he would keep coming back for medical
attention.

The Saint Francis Foundation teamed up with The People’s Shelter to
renovate a home on Jefferson Street that was owned by Jason Coalter, chairman
of the Saint Francis Foundation Board. With the help of donations, the
two-story, four-bedroom home will become the permanent residence for Jerry and
three other single homeless men over 50 years of age.

They chose homeless men of that age because “there seems to be more
of a need,” said Wiferth. “They can’t work. They’re unemployable.”

Wilferth stressed that the home is not a homeless shelter where
homeless people spend a night or two and move on. This is a permanent residence
for people who had no home. Some, he says, are veterans.

The men selected to live in this home are people who have been
known for awhile and are vetted. They can live in the home as long as they
want, but while living there they are expected to do chores, keep the place
clean and keep themselves clean. No drugs or alcohol are allowed. Plus, they must
pay a little something on the rent. It’s not much and it’s based on their
income (social security, welfare, etc.), but it’s a little something to give
them a sense of ownership or, as Wilferth puts it, “some skin in the game.”

Each man will have his own private bedroom. They will share two
bathrooms, two living rooms and a kitchen. The men will cook for themselves.
One will be designated as a house manager and will act somewhat like a dorm
monitor in college.

The home, which has been dubbed “The Peaceful Place,” is not funded
by grants. Its expenses are paid through Foundation funds and other donations.

This one home will not solve homelessness in our area, but it will
help four men (and later possibly six or eight) who have no home. “This is a
ministry,” Wiferth said. “You can’t fix the problem [of homelessness]. It’s not
about a problem to fix; it’s about a person to love.”

Pastor Renita Green has operated “The People’s Shelter” in the
basement of the St. James AME Church, 516 North St., Cape Girardeau, since
2018. During winter months, it offered a warm place to spend the night, a hot
shower and free meals. Since it opened, more than 500 people have come through
the doors. “Last month, we served 3,015 meals from our church,” she said.

The Peaceful Place will continue to be funded through donations. At
the home-warming party, guests were invited to donate money or typical
housewarming gifts.

One young boy, Jason Abernathy, presented a check for $1,250 to the
Foundation for the home. He added cash donations that had come in since the
check was cut to make his total donation come to $1,301. He began raising money
with a lemonade stand. When he was forced to shut down the lemonade stand, he
moved off the street and into the digital world by requesting donations online.

A fundraising sock hop is planned for 7-10 p.m. Friday, Oct. 4, at
the Osage Centre in Cape Girardeau. Tickets will be $50 and will admit two
people. More details will be made available later.

The occupants are expected to move into the home Sept. 1.