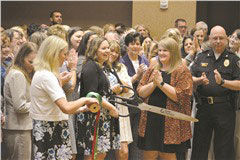 The Safe House for Women held a ribbon cutting for its new shelter
on Tuesday, Aug. 20, during the organization’s annual luncheon at the Isle Casino.
The new 18,000-square-foot shelter increased bed capacity from 17 to 40. The
three-story building includes 10 bedrooms, as well as a library, a computer
lab, a play room and more bathroom and living space.

At our old shelter, we only have five bedrooms, 17 beds and one
client bathroom,” Hill said. “Now we have a lot more accommodations for
residents.

The new shelter is now handicap accessible and can house mothers
with teenage sons. Before, Hill said they had to find other housing options for
many of their clients.

“Prior to moving into the new building, we would only be able to
accommodate half or less of the people contacting us needing shelter so they
could leave a violent situation,” Executive Director Jessica Hill said. “We are
really hoping that with our new building that number will go way down.”

Hill added that they previously spent a lot of their funds on
housing women and families in hotels when the shelter was full. Now those funds
can be redirected to more client services.

Hill said the $2.2 million project came in $60,000 under budget and
was finished early by Columbia Construction. The building received donations
from Art Van Furniture and local churches to furnish the building.

The shelter housed its first residents on June 26. Safe House moved
three adults and two children from the old shelter, and opened up for new
clients a week later. Since then, as many as nine of the 10 bedrooms have been
full.

Last year, the shelter
housed 119 women and 51 children. With the new shelter, Safe House can double
the number of people they can house. Hill said it was a group effort and involved is excited to “help more and serve
more.”
In this article: