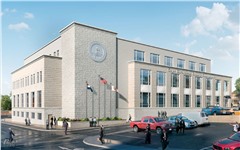 The 82,000-square-foot courthouse and underground parking facility will include six new courtrooms and will be constructed on the corner of N. Missouri Street and W. Washington Street, adjacent to the Cape Girardeau County Sheriff’s Office & Justice Center.

Penzel and TreanorHL were up against River City Construction, which has three locations, including one in Benton, IL, and the architectural firm HOK in St. Louis.

Both teams submitted proposals to the County Commission on Aug. 31. The county first scored the technical design proposals before opening the financial proposals and judging them based on cost.

Both proposals received the full 40 points for their financial scores. Both submitted plans that cost exactly what was budgeted by the Commission, which was $18 million.

“It was 1908 when we last built a courthouse – that’s a long time,” Commissioner Charlie Herbst said. “Previous to that the courthouse was built in 1854, actually by the federal government and we kind of inherited it through that process.”

The county will now begin negotiations with the Penzel/TreanorHL team to put together a final contract.

“A lot of effort went into this proposal process and it is exciting to be able move into the construction phase,” Penzel Construction CEO Phil Penzel said. “I am very proud of our team and am honored to have been chosen to construct this important facility.”

TreanorHL has extensive experience in planning, programming and design specifically geared toward justice facilities. “Our Design-Build Team worked to provide a courthouse design that is respectful of the importance of the court, while making effective and efficient use of the tax-payers’ resources,” Andy Pitts, principal at TreanorHL, said.

According to Commissioner Paul Koeper, foundation work could begin as early as late October, with a March 30, 2020, projected completion date.

The county commission approved a capital improvement plan on Sept. 17. The plan, which covers the next five years, will be uses when making fiscal decisions during the budgeting process and will ensure that future capital projects are competed in a properly funded and timely manner.

Projects scheduled for 2019-2024 are the new county courthouse, communication towers for dispatching and the jail, new election equipment, HVAC improvements and improvements to the lake in Cape Girardeau County Park South. The plan also includes funding sources for each project.

The commission will review the plan annually, according to a policy adopted earlier this month.