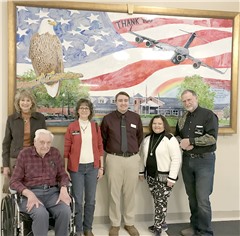 A massive 5-foot by 10-foot painting of the Missouri Veterans Home with a U.S. flag, bald eagle, rainbow and military aircraft flying overhead was unveiled Thursday afternoon during an open house at the Veterans Home in Cape Girardeau.

The painting was the brainstorm of Aaron Horrell and Barb Bailey of the Painted Wren Art Gallery in Cape Girardeau.

They took their concept for the painting to Canedy Sign Graphics in Cape Girardeau. Canedy printed the concept in gray scale on an aluminum composite panel which the company donated to the project.

Horrell and Bailey then took the panel to the Veterans Home in July and gave veterans living there the first opportunity to add acrylic paint to the panel.

Everyone who wanted to paint was given a brush with paint on it and told where to put the color. The veterans were instructed to paint the building, because it was their home. The staff also was invited to paint. Administrator Mindi Pruitt remembers adding yellow paint to part of the eagle’s claw.

The public was invited to donate $1 for the opportunity to paint a little bit of the project. The unfinished painting was at the SEMO District Fair in September. Some people donated more than a dollar, and some people donated money without painting. A total of 1,128 people painted the picture and about $3,000 was raised. The money was given to the Veterans Home and evenly distributed among the 150 residents.

Even though more than 1,100 “artists” had contributed their talent to the project, it remained unfinished. Horrell and Bailey put on the finishing touches themselves. They then had Canedy Signs put a protective coating over the painting. Stev-Mark West donated the frame to go around the panel.

The painting now hangs proudly on a wall near the main entrance.

In addition to the unveiling, tours of the newly remodeled facility were given by staff members and refreshments were served in the chapel.

The Missouri Veterans Home is divided into three wings, and each wing has three halls with a commons area and nurses station. A social worker is assigned to each wing.

Most rooms are semiprivate (with two occupants) but there are a few private rooms available. The Veterans Home is running at capacity and there is a waiting list.

Our Veterans Home is one of seven throughout the state.