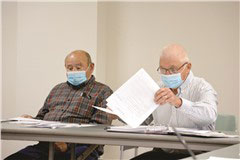 The countywide mask order is here to stay until the number of COVID-19 cases go down or a vaccine/treatment is widely available.

The Cape Girardeau County Public Health Board voted unanimously to amend the face covering order during its regular monthly meeting on Oct. 27, removing the need for the Board to extend the order each month.

The mask order will be lowered to “strongly recommend” if the county’s viral lab test positivity rate is below five percent for a two week period and the rolling 14-day case count of new COVID-19 cases in the county is below 200 for a two-week period.

The mask order would go back to “required” if the positivity rate goes above 10 percent and the rolling case count of new COVID-19 cases goes above 250 for a two-week period.

In the Public Health Center’s Oct. 28 weekly overview, the County had a 13.1 percent positivity rate and a rolling 14-day case count of 430 new COVID-19 cases.

The mask order will also be removed if a COVID-19 vaccine or a “highly-effective, relatively low-cost” COVID-19 therapeutic treatment becomes widely available to the general public.

The criteria for lifting the mask order were chosen in light of the White House Coronavirus Taskforce recommendations, as well as previous community spread control.

The Board meeting, held at the Osage Centre in Cape Girardeau, drew a smaller crowd than previous months, with around 20 people in attendance. Public comments were not allowed at the meeting, with Board Chairperson Roland Sanders saying the Board had already heard a good number of positive and negative comments related to the use of face masks. “I don’t think there’s anything new that can be brought up that hasn’t been brought up,” he said.

Sanders did add that the Board would answer questions about the amendment and would accept information sent to the health center by e-mail or letter.

The Board was asked about enforcing the order, to which Sanders replied, “We do not have the personnel to enforce,” Wernsman added that the Health Center’s role is to provide information and education.

The Board was also asked about the use of positivity rate as one of the key factors of removing the mask order. Medical Director John Russell said the positivity rate is the number of positive confirmed cases divided by the number of people who have been tested. Russell said, “You can’t test your way out of a pandemic,” which is why the rolling case count is also included.

State Rep. Barry Hovis addressed the Board during the meeting, saying he appreciates the hard work the Pubic Health center is doing, and said he has gotten calls both for and against the mask mandate.

He said he was concerned about the mandate not being uniformly enforced, and encouraged the Board to ask if the order does more damage to citizens’ “view of government than the virus itself.”