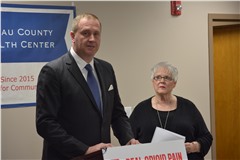 Missouri Attorney General Eric Schmitt visited Cape Girardeau on April 16 to launch “Real Opioid Pain,” an initiative to collect stories from Missourians who have been affected by opioids.

Schmitt plans to use these stories to help the state in a lawsuit against three opioid manufacturers his office claims used deceptive marketing practices to mislead doctors and providers about the highly addictive nature of these drugs.

“We know how painful these stories can be to tell, but we believe that they can help us bring those who caused this pain and suffering to justice,” Schmitt said. “We contend that for far too long, these big pharmaceutical companies have put profits over people. With the help of Missourians who have suffered directly from their practices, we believe we can build a stronger case to make them pay.”

“Missouri is in the midst of one of the most severe health crises in modern history – opioid abuse, opioid addiction, opioid overdose and deaths,” Schmitt said. “Of course this is not news, we are all aware of the problems.”

According to the Missouri Department of Health and Human Services, one in every 65 deaths in the state is due to opioids. In 2017, 952 Missourians died from opioid overdoses.

“Tragically, it’s highly likely that each one of us knows someone who’s been impacted by opioids,” Schmitt said. “After all, the opioid epidemic knows no boundaries of geography, economics, race or creed.”

The attorney general said Missouri is probably the first state to go down the path of gathering its citizen’s firsthand accounts of the opioid crisis, calling it “the Missouri way of fighting back.”

“I think the strength of the case lies in the people who have been affected,” Schmitt said. “The people who have the courage to come forward and tell their stories – we want to capture that and get a real glimpse at the devastating impact that the misrepresentations have had on this state.”

Jane Pfefferkorn of Mission Missouri recovery support services said she applauds this initiative and believes it is time to have a productive conversation about the pain and reality of substance use.

“It is time to talk about the pain of losing our loved ones to drug overdose and to call attention to the fact that there are people who have made decisions based on greed,” Pfefferkorn said. “The truth must be told.”

Dr. Christopher Reis, the director of Regional Brain & Spine pain management clinic in Cape Girardeau, thanked the attorney general for being proactive on opioids and allowing those affected by opioids to see they aren’t alone.

“Having this as another option for patients to know that there are other people like them is great,” Reis said. “I can’t thank them enough for providing this as an opportunity for patients.”

People can share their stories at the initiative’s Web site, www.realopioidpain.com, as well as find resources for those dealing with opioid addiction.

The attorney general’s office plans on launching a statewide television and radio advertising campaign to support the program, as well as promoting the web site through social media.

Schmitt said he expects the lawsuit to go to trial in less than two years.