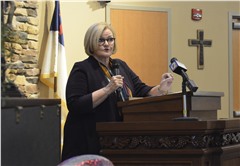 U.S. Sen. Claire McCaskill was joined by Cap America, Inc. CEO Phil Page and COO Mark Gammon for a press conference in Cape Girardeau on Friday, where they highlighted the harmful impact that the Administration’s trade war is having on Missouri farmers, ranchers and manufacturers.

“We don’t have to get into a full-blown trade war,” McCaskill cautioned.

Quoting from a statement by the U.S. Chamber of Commerce, McCaskill said, “Tariffs imposed by the United States are nothing more than a tax increase on American consumers and businesses, including manufacturers, farmers and technology companies, who will all pay more for commonly used products and materials. Retaliatory tariffs imposed by other countries on U.S. exports will make American-made goods more expensive, resulting in lost sales and ultimately lost jobs here at home. This is the wrong approach, and it threatens to derail our nation’s recent economic resurgence.”

McCaskill told the group of about 30 supporters at her coordinated field office at 20 N. Pacific St., “I don’t fight the president on everything. “This is a case where Missouri will be really hurt.” She said tariffs will harm our state’s agricultural and other exports and will make it more difficult to manufacture things here because of increased raw material costs.

When American goods become more expensive, consumers go elsewhere for a cheaper product. “We are chasing customers into the hands of the Chinese,” she said.

Missourians are upset about how tariffs are affecting them. “Our phones are ringing off the hooks in Washington,” she said.

McCaskill admits there are some trade imbalances which need to be fixed and agreed that “we have a problem with China” over allegations of  stealing of U.S. intellectual property and erecting trade barriers. But she thinks these problems can be handled in ways other than by erecting tariffs ourselves. She said these problems need to be corrected with a scalpel, not with a two-by-four.

Phillip N. Page, chairman and CEO of Cap America, a manufacturer of sports caps in Fredericktown, agreed. “It’s like trying to fix a Swiss watch with a sledge hammer,” he said.

Threats of tariffs make future costs of doing business uncertain. “There are scores of  people like me who do not know how to price our product,” he added.

Cap America started in 1985 and now has 275 employees. The company manufactured its own cloth caps until two years ago, when it began importing most of its blank caps from China and finishes them by decorating them.

“We import the most expensive part,” explained Mark D. Gammon, president and COO. It is expected that tariffs on cloth caps coming here from China could cost the company an additional $1 million to $3 million, depending upon whether the tariff is set at 10 percent or 25 percent.

These cost increases will be passed on to the consumers who buy the finished product, making the caps more expensive. “It affects our ability to be competitive,” Gammon said.

“The Administration’s tariffs are threatening our bottom line, as well as the significant economic activity that we bring to the state. On top of that, the scariest part of this is the uncertainty. I’m glad that Senator McCaskill is standing with Missouri businesses that are being undermined by these tariffs, and I know she won’t stop fighting for us,” said Page.

“The Administration’s decision to start picking winners and losers isn’t fair to Missouri farmers, ranchers, and manufacturers, and it isn’t the American way” said McCaskill in a prepared statement. “While I support going after cheaters like China who manipulate international markets, this reckless trade war has hit hardest in communities here at home. That’s why I will keep fighting to end these disastrous trade policies and to support our farmers, ranchers, manufacturers, and folks across Missouri.”