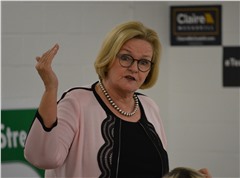 U.S. Senator Claire McCaskill visited Cape Girardeau on Oct. 17 as part of her “Your Health Care, Your Vote” tour. McCaskill, who is up for re-election in November, spoke to around 50 supporters at the Laborers’ Local 1104 office.

McCaskill spoke about her work in health care, including a recent bill signed by President Donald Trump that requires pharmacists to tell you the cheapest way to get prescription drugs.

“We know that hundreds of millions of dollars was being spent needlessly by people paying more than they needed to pay, because pharmacist were prohibited under contracts from telling them, ‘hey, this is not the right way to buy this drug,’” McCaskill said.

The senator said the biggest issue in health care right now is the high cost of prescription drugs. McCaskill did an investigation of the 20 most prescribed drugs in Medicare, and found that every one increased every year for the past five years at a rate that is 10 times that of inflation. She also spoke about a bill she was able to pass on a bipartisan basis that allows generic drugs to get in the market more quickly.

“Is any one of these things enough? No, but I just want to make sure Missourians know I’m trying to find every way that I can to save money on prescription drugs and ultimately I’m not afraid of big pharma,” McCaskill said. “I guarantee they are spending millions of dollars to try and fight me in this election, and I’m just not afraid of them.”

McCaskill said it is “unbridled greed” on the part of pharmaceutical companies that has led to this crisis. She added that the United States is the only country in the world that does not negotiate drug prices based on volume.

She also brought up the things she believes the Affordable Care Act has done to improve healthcare in the country, including closing a coverage gap in Medicare Part D presciption drug plans.

McCaskill spoke about her Republican challenger, Missouri Attorney General Josh Hawley, and how he has signed on to a lawsuit that would repeal the Affordable Care Act entirely, including protections for those with pre-existing conditions.

The senator said there are things that need to be fixed in the ACA, but that she is part of the bipartisan group that is trying to fight for these fixes.

McCaskill talked to the crowd about worker’s rights. She praised the campaign to defeat Prop A, the right to work proposition earlier this year in the state. She also voiced support for Prop B, a Nov. 6 ballot measure that would raise the minimum wage to $8.60 an hour with a 85-cent-per-hour increase each year until 2023.

McCaskill also derided the use of “dark money” in politics. She said if you can’t figure out who pays for the bill “whether it’s for me or against me, ignore it.” McCaskill said if people knew who was paying for the ads against her, they would like the enemies she’s made.

“What you got to do is decide – are you going to vote for a senator that’s on the side of pharma or that’s on your side,” McCaskill said.