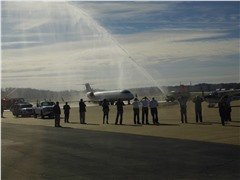 As the sun reached its noontime position overhead, all eyes at Cape Girardeau Regional Airport scanned the blue sky for any sign of a fast-approaching jet airliner — the first one to service this area in decades.

Suddenly, a black speck appeared, transformed itself into the shape of a plane, and grew into a white Bombardier CRJ 200 jet aircraft with upturned wing tips, two jet engines near the tail and seats for 50 passengers.

The airliner landed and taxied to the terminal. As it rolled from the taxiway onto the concrete airport apron, two Cape Girardeau fire engines sprayed arches of water over the aircraft to welcome the inaugural flight.

The plane taxied to the terminal gate, turned around and stopped. A mobile stairway was pushed into place and 14 passengers deplaned into a crowded terminal, filled with city, airport and airline officials, plus travelers and curious members of the public.

“I will tell you, that was fun,” Airport Manager Bruce Loy told the crowd. He teared up a bit as he thanked Cape Air for its service over the past years.

“I want to give one last shout out for Cape Air,” he said. Cape Air had provided several flights a day between Cape and St. Louis in twin-engine propeller-driven 9-passenger Cessna 402 aircraft.

“It has been seven months in the making to get to this point,” Loy said. “We had to enlarge the baggage area. To go from eight or nine passengers to 50 seats is a phenomenal thing to do. The passenger screening area had to be enlarged so there is more holding area on the back end,” he added.

He thanked the efforts of the Airport Board, which “put in a ton of time” evaluating five airlines to determine which one would serve Cape. In the end, it was a unanimous vote. “I know we made the right decision,” Loy said.

In order to have the 50-passenger jet serve Cape, the airport had to be upgraded from a Class 3 to a Class 1 airport. There are some new regulations to follow, but the biggest changes are that a fire truck must be at the airport from 15 minutes before arrival until 15 minutes after departure, and there is additional safety training required. He thanked the Cape Fire Department for its assistance.

“Our airport is very important to us,” said Cape Girardeau Mayor Harry Rediger. “It’s part of our infrastructure. You can board here and fly anywhere in the world.” He said there are something like 570 flights a day out of Chicago. “This day is another beginning,” he said.

In addition to more passenger seats, these jets have a crew of three—a pilot, a copilot and a stewardess—plus a lavatory. “It’s all about customer service,” Rediger said.

A center aisle divides the cabin with a row of seats on one side and two adjacent seats on the other side.

There are two flights a day. The morning flight stops in Quincy, Illinois, each way. The mid-day flight is nonstop.

As a ribbon-cutting ceremony took place in the terminal, followed by cake and punch, 24 passengers board-ed the plane for its return flight to Chicago.

The celebrants in the terminal watched through the glass windows as Flight 5009 taxied out to the end of the runway and took off into the blue sky for the first time.

A new era of aviation has begun at Cape Regional Airport.