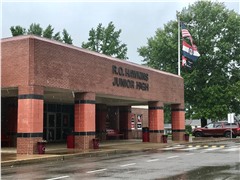 The Jackson R-2 School Board was asked to consider the next steps to address growth in the District, with the Board looking at voting on an expansion at the junior high next month.

The junior high expansion, which was phase two of facility improvements in the District’s 2016 strategic plan, would include building a new library and a new band room, as well as moving the counselors’ offices closer to the main office.

“We have 250 students in band at the junior high,” Superintendent Dr. John Link said. “This year we are looking at having band in the old gym. We don’t have a classroom big enough.”

The project would also include funding for renovations at the District’s administrative office. Link said the project would be funded with a $5 million lease purchase and would be completed by the start of the 2020-21 school year if approved in August.

Link said the District would not have to make payments for the project until 2022, at which point the District will have all its land payments complete and the turf project will be paid off. “We can do this with no additional hit to our budget,” Link said.

The Board also discussed what phase three of the District’s facility updates could be. Link said it might be time to look at increasing the District’s operating budget.

Currently $2.937 of the District’s $3.80 tax rate goes into an operations fund, $0.3725 goes into a fund to pay off the District’s bond debt and $0.49 goes to capital projects that are mostly paid through lease-purchases. Link said they could increase their operations budget by consolidating their debt from bonds and lease-purchases into a single fund, freeing up its capital projects funding for operations.

Link said four years ago, the District was able to save $300 per student, but enrollment is growing at a faster pace than that of the assessed value of property in Jackson, which affects local taxes the District receives. He added that the District has made improvements in that time that it wouldn’t want to undo.

“In 2013, we had 30 kids in a classroom, we didn’t have as much technology as needed, our facilities needed updating and we didn’t have 5,300 students,” Link said.

If enrollment trends continue, Jackson could have 6,300 students by 2028. “If this trend continues, then we either have to cut our expenditures or find a way to increase our revenue,” Link said. “We have plenty of reserves to get us through the next several years, but looking long term, we need to really be cognizant of this.”

Link presented several plans the Board could choose that would increase the District’s operating budget and could be voted on by Jackson residents in April 2021.

One plan includes restructuring debt, adding a gymnasium to North Elementary, paying off lease purchase and moving $0.49 of the District’s tax rate to operations, all without increasing the tax rate. Link said the problem with this plan doesn’t include much to get voters excited to support the project.

“People don’t want to vote on a bond issue just to pay off debt, so maybe we can do the performing arts center sooner rather than later,” Link said.

The performing arts center would be a $15-20 million project, which could include a FEMA shelter to have the federal government cover some of the costs. Link also mentioned that the project could be funded through a community partnership with the city, if the city agreed. The center would also free up space at the high school to increase cafeteria space and add an additional 12 classrooms.

Link said whether or not they are able to do the performing arts center in 2021, a bond vote for future improvements around 2024 may need to include a $0.15 tax increase.

“At some point in time down the road, we are going to have to ask for more help,” Link said. “I don’t know if that’s good or bad.” He added the increased rate of $3.95 would still be significantly lower than Cape Girardeau’s current tax rate of $4.15.

The Board approved going forward with a cost analysis and planning documents for the junior high expansion to have a better view of the project before it potentially votes on it in August.

• The Board approved the professional development plan for the 2019-2020 school year. Dr. Matt Lacy, associate superintendent of secondary and personnel, said the plan focuses primarily on curriculum reviews and meeting the social and emotional needs of students.

At the elementary level, professional development will touch on the core instruction of literacy and math to lay the foundation for future learning. There will also be a focus on collaboration, data and iPad training for kindergarten and first grade teachers.

The secondary schools will focus on positive relationships and creating a positive school culture. Lacy said the District had recently had a training session on restorative practices, which will continue to be a professional development topic in the coming year.

“Restorative practices is about augmenting discipline,” Lacy said. He told the story about a student who was tardy multiple times and had received several detentions, which weren’t changing the number of times she was late to school. They eventually learned her mother was working two jobs and currently undergoing cancer treatment.

“We quit worrying about the discipline and started working on how we could get her to school and support her family,” Lacy said. “We want to hold kids accountable, but we want to meet them where they are and treat them as human beings.”

Another topic that will be addressed in professional development at the middle school and junior high is grading practices. Lacy said the schools are looking into what students learn from getting a zero on an assignment. He said they are moving towards a system where students don’t have a choice in not doing the assignment because the school is responsible for making sure they learn the material.

• The gym that was built before the Prop J expansion at the middle school will be receiving a new air conditioning system. The District received bids from two companies, with the lowest bid coming from Crescent Parts & Equipment.

The District approved going with Crescent’s bid of $17,594. The system will be similar to the one it is replacing, and District staff will install the new system.