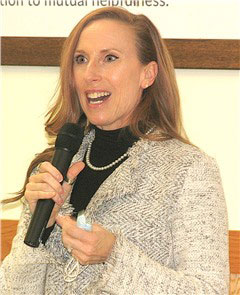 Holly Rehder, a state representative for Dist. 148 (Sikeston) and soon to be our state senator in Dist. 27, spoke to the Althenthal-Joerns American Legion Post 158 in Jackson Dec. 8.

“I just wanted to let you guys know who I am so that you feel comfortable reaching out to me for anything and everything,” she began.

She said it was important to her to take care of veterans. Her father is a retired Navy Seabee and her uncle, Stan Thompson (her father’s twin brother) from Jackson, is a veteran who served in the Vietnam War. “I have a very dear place in my heart for you guys,” she said. “I want to always be there for you.”

Rehder is from Sikeston. She raised her family there, and both her church and the business (cable television contractors) which she and her husband run together, are there. However, six years ago, Holly and her husband built a home in Scott City and moved there.

Construction of the new veterans medical facility in Cape Girardeau is on hold because of the coronavirus pandemic, she said. When a vaccine becomes available, work will proceed.

The facility will be more than a clinic; it will offer many of the services that a hospital has, but it will not offer in-patient care.

Rehder was asked when the legislature would provide more money for MoDOT. She said she did not know; the legislature is currently scrambling to fund Medicare expansion, she said.

There are currently no plans to raise the gasoline tax to pay for road repairs. A move to raise the gas tax by 17¢ a gallon passed the legislature but was voted down by Missouri voters.

Rehder was asked about some kind of tax put on electric vehicles, which use Missouri’s roads but don’t pay any gasoline tax.

She said there are discussions about charging a fee when an electric car is registered that would offset the lost revenue from unpaid gas tax.

Rehder was asked about problems Cape County has experienced getting reimbursed from the state for housing state prisoners in the county jail.

She said Scott County has had the same problems. There is a discrepancy over “may pay” and “will pay” for each prisoner in state stautes, so county officials bill one amount, but state budgetary officials pay a lesser amount. House Budget Chair Scott Fitzpatrick “had a really long discussion about that this past  year, and we are supposed to have that increased,” she said.

On a follow-up question, she was asked about the state paying for medical care for its prisoners. When prisoners were moved from the Cape County Jail to a state prison, the County billed the State for medical care the prisoner received while in the county jail. Nothing ever became of it.

Rehder said she would look into that issue, but wondered if Medicare expoansion would not take care of that problem.