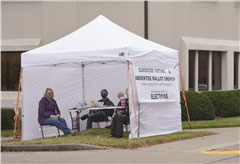 “I’m expecting this to be the biggest turnout we’ve ever seen in Cape Girardeau County, in Missouri and across the nation,” Summers said, noting that this view is shared with the many election officials she has spoken to across the United States. “If you go out and talk to people, they are ready to vote in this election,” she said.

Another sign that Cape Girardeau County is likely to see higher turnout is that voter registration this year is also higher than usual. More than 4,500 new voters were registered this year, with just over 2,000 registered during the same time period in 2016.

As of Oct. 23, the County Clerk’s office had received 6,465 ballots from voters either through in-person absentee voting or by receiving mailed ballots. The County had also sent an additional 844 ballots through the mail but had not yet received them back.

Summers said the previous record for absentee voting in the county was a little over 3,000 voters. That number has already been doubled in this election, with absentee voting still ongoing.

“One of the main reasons people are choosing to vote absentee is that they are at risk for COVID-19,” Summers said. This year, Missouri has added contracting COVID-19 and being at-risk to COVID-19 as excuses to vote absentee.

Those at-risk include those 65 years old or older, those living in a long-term care facility, those with asthma or a chronic lung disease, those that have a serious heart condition, those who are immunocompromised, those with diabetes, those undergoing dialysis for a chronic kidney disease and those with liver disease.

Other accepted reasons to vote absentee include being out of the county on election day, being incapacitated or confined due to illness or disability and religious beliefs.

The last day for the County to accept mailed ballot requests was Oct. 21, but absentee voting in person is open through Nov. 2. Absentee voting will take place Monday through Friday at the County Administrative Building in Jackson and the Osage Centre in Cape Girardeau.

“One day, between Cape and Jackson, we had 455 voters in a day,” Summers said, adding that the number of voters each day has increased as they’ve gotten closer to election day.

She said that her office has also been able to use the County Commission chambers at the County Administrative Building to allow for most space for absentee voters in Jackson.

This week, curbside voting and absentee ballot drop-off will be available at each location for voters with physical disabilities or with limited mobility. Summers said curb-side voting has always been available, but this is the first election where they are hosting a specific event for these voters.

“We’re trying to take some pressure off of our polling places, because we do have some curbside voters that go to their polling place,” Summers said. “They can still do that this year, but we want to make sure they get served in a timely manner and also limit the amount of judges we take out of our polling place on election day.”

These voters will be able to fill out their ballot or return their absentee ballot without having to go into the polling location. Tents have been placed at each location to signal where voters should go for curbside voting.

Summers said those who are currently quarantined because of COVID-19 can also vote curbside and will remain quarantined in their vehicle while they vote.

On election day, all regular polling locations will be open from 6 a.m. to 7 p.m. Summers said social distancing markers and plexiglass safety screens will be used at each location. In addition, hand sanitizer and facemasks will be available.

“These safety precautions worked well in the June election that was postponed from April and also the August primary,” Summers said. In addition, her office is currently hiring sanitation attendants who will clean the polls throughout the day.

“We just ask the voters to try to social distance from one another, giving everybody their space, and hopefully moving the line along smoothly — just like we do in every election,” Summers said.

Summers also reminds voters that wearing apparel or displaying signage in a polling place that promotes any candidate or issue on the ballot is against Missouri law.