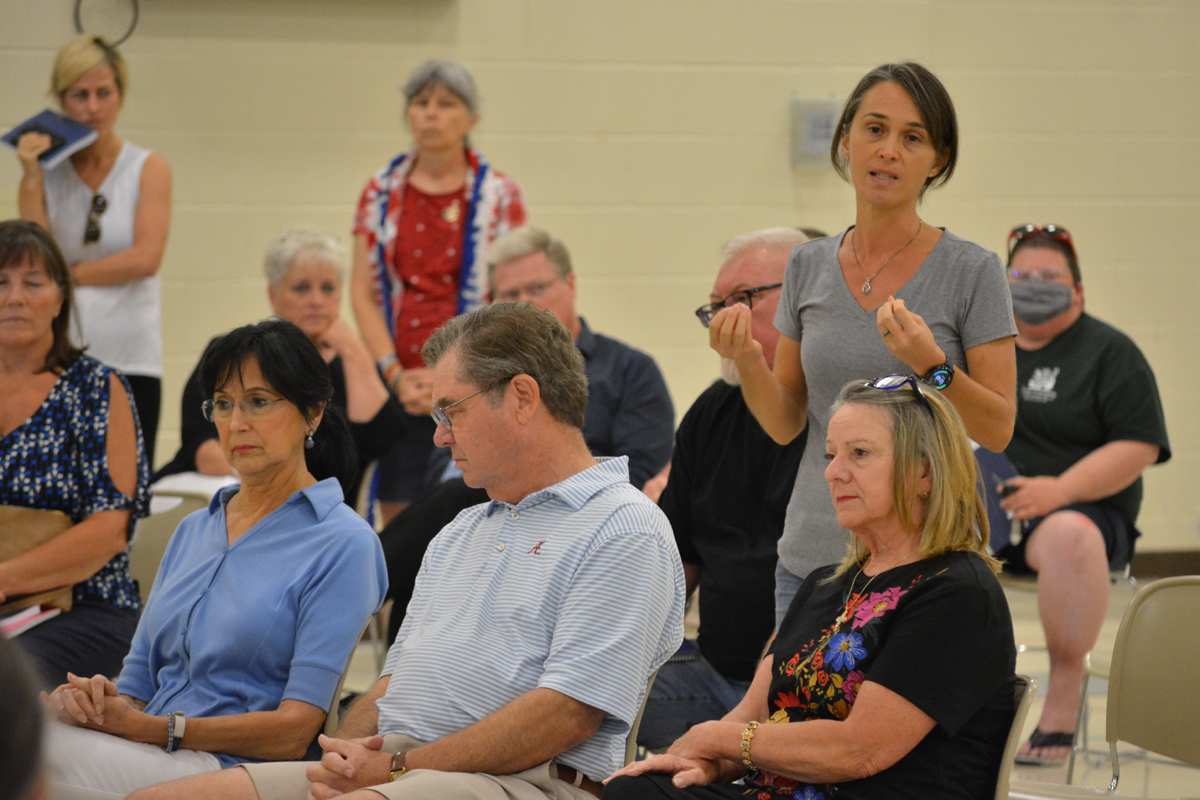 A crowd protests the Cape Girardeau County Public Health Board's recommendations to get COVID-19 vaccinations and wear facemasks during the public health meeting on Aug. 24. Photo by Jay Forness

The Cape Girardeau County Public Health Board passed a motion affirming the current Centers for Disease Control guidelines and strongly recommending COVID-19 vaccinations during a contentious board meeting.

The vote, which was initiated by board member Phillip Taylor, passed 3-1 during the public health board meeting on Aug. 24 at the Shawnee Park Center. Vice Chairperson Georganne Syler, Diane Howard and Taylor voted for the motion, while Secretary Eric Becking voted against. Board chairperson John Freeze could not attend the meeting.

The motion recognized that both the Missouri Chapter American Academy of Pediatrics and the CDC currently recommend the wearing of masks for staff and for students over the age of two years old in public schools to prevent the transmission of COVID-19.

It also moved that the public health center recognize that the CDC currently recommends the wearing of masks in indoor public spaces for all individuals regardless of their vaccination status.

The motion also strongly recommended COVID-19 vaccinations for all individuals aged 12 and older, stating that the vaccine is safe, effective and free.

Howard asked LaVanchy to sit down several times, saying “now is not the time for public comments.” LaVanchy, who continued to speak to the board, was met with applause from the crowd of 80-100 people.

Taylor again tried to read his motion and was interrupted with another round of people yelling “no” before he was allowed to finish his motion on his third try. The crowd yelled out again when Taylor stated that the vaccine was “safe and effective” in the proposed motion.

Syler told the crowd, which was mostly maskless despite the Shawnee Park Center’s mask requirement, the board would have to adjourn the meeting if they were not able to complete their regular business as a board.

“This is a board meeting that you have a right to attend, but you do not have a right to interrupt,” Syler said to the crowd. “If you choose to keep interrupting, we will simply adjourn the meeting.” Becking received a 20-second round of applause from the crowd when he said he would not vote in favor of the motion, as he personally didn’t agree with the statement.

Discussion on the motion was cut short because of the interruption and a motion for adjournment was put on the table. The vote of 3-1 was then passed, with Becking saying “this is a huge deal” and that he was not trying to pick sides.

Howard reiterated that Becking was free to vote against the motion and Syler added that she understood his position and respected his point of view.

The crowd interrupted again as Public Health Center Epidemiologist Autumn Grim stated that COVID-19 cases in the county have increased significantly over the past few weeks.

Damon Dillard then addressed the board after the meeting had concluded, stating that the people at the meeting want “a relationship with our government body.” Dillard said they didn’t want to fight with the board, but that the motion passed was “totally unacceptable to our community – not any part of it will we accept and we will not comply.”

Syler said the board was willing and able to have a discussion, but it would not be at a board meeting where they have business they have to address. “I do want to clarify that the motion made and accepted today has no mandate involved in it,” she said.

“We are not asking you to comply,” Syler added. “We are simply saying that the board that was elected has said that we believe there is truth and validity to it. Obviously, there are different feelings here.”

Dillard replied that the board’s suggestions have a great deal of influence in the community, whether or not it is a mandate.

Howard replied that individuals and other entities are free to regard or disregard what the board suggests and she asked the public to direct their concerns to the individual businesses and government bodies that have mandates they disagree with.

“Our county health department has not had a mandate in effect as to anything for six months,” Howard said. “If people are concerned about overreaching, I’m uncertain as to what we have done that has even reached you, no less overreached you.”

Becking added that this is “uncharted territory across the United States.” He said the board has never had a meeting where so many people wanted to speak before COVID-19, and it is hard to figure out the best way to have everyone’s opinions represented.

The vote to adjourn took place as several audience members continued to speak. An item on the meeting’s agenda to review guidelines for public comments during public health meeting was not reached due to the early adjournment