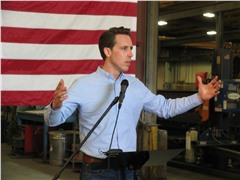 Hawley made stops in Kansas City, Springfield and St. Louis before speaking to a crowd of about 60 people at Standley Batch Systems in Cape Girardeau Friday afternoon. Hawley was elected as Missouri’s 42nd attorney general in 2016.

According to Cape County Prosecuting Attorney Christopher Limbaugh, who introduced him, Hawley received more votes in that election than any other candidate. Perhaps his popularity is one reason he is challenging McCaskill, a 12-year veteran.

Limbaugh described Hawley as “a Constitutional lawyer in his heart, who believes in the Constitution as it is written.”

In addition, Limbaugh said Hawley is “humble, compassionate and courteous to those around him.” And as one prosecutor to another, Limbaugh described Hawley as “aggressive, fair and just.”

Hawley said he is running for the Senate before completing his first term as attorney general because he sees the country is in a crisis.

He and his wife of eight years, Erin, have two boys, ages 5 and 3. “What we’re doing in this election, we’re doing for their future,” he said.

Hawley said liberal Democrat elitists on the East and West Coasts consider this area “fly-over country” and have little respect for our way of life.

“They tell us we’re the past; they’re the future. We need someone in the Senate who will stand up to them. The fight for the Heartland comes down to sending Claire McCaskill home.”

Hawley claimed Midwestern values such as faith, service, work and honor are bring threatened by Hollywood, Wall Street and the politicians in Washington, D.C. whom he calls “the D.C. Cartel.”

The D.C. Cartel, he says, hands out favors to lobbyists and ignores the problems such as rising healthcare costs and the opioid crisis.

Hawley said his opponent claims to be independent and bipartisan but her record shows she is a “partisan liberal Democrat.” She voted to raise the cost of healthcare, raise taxes, and increase regulations while she won’t secure the border and doesn’t want a question on the U.S. census asking about citizenship. “She voted to stack the courts with left wing ideologues,” Hawley claimed. “She voted with [liberal Democrat N.Y. Sen. Chuck] Schumer 90 percent of the time.”