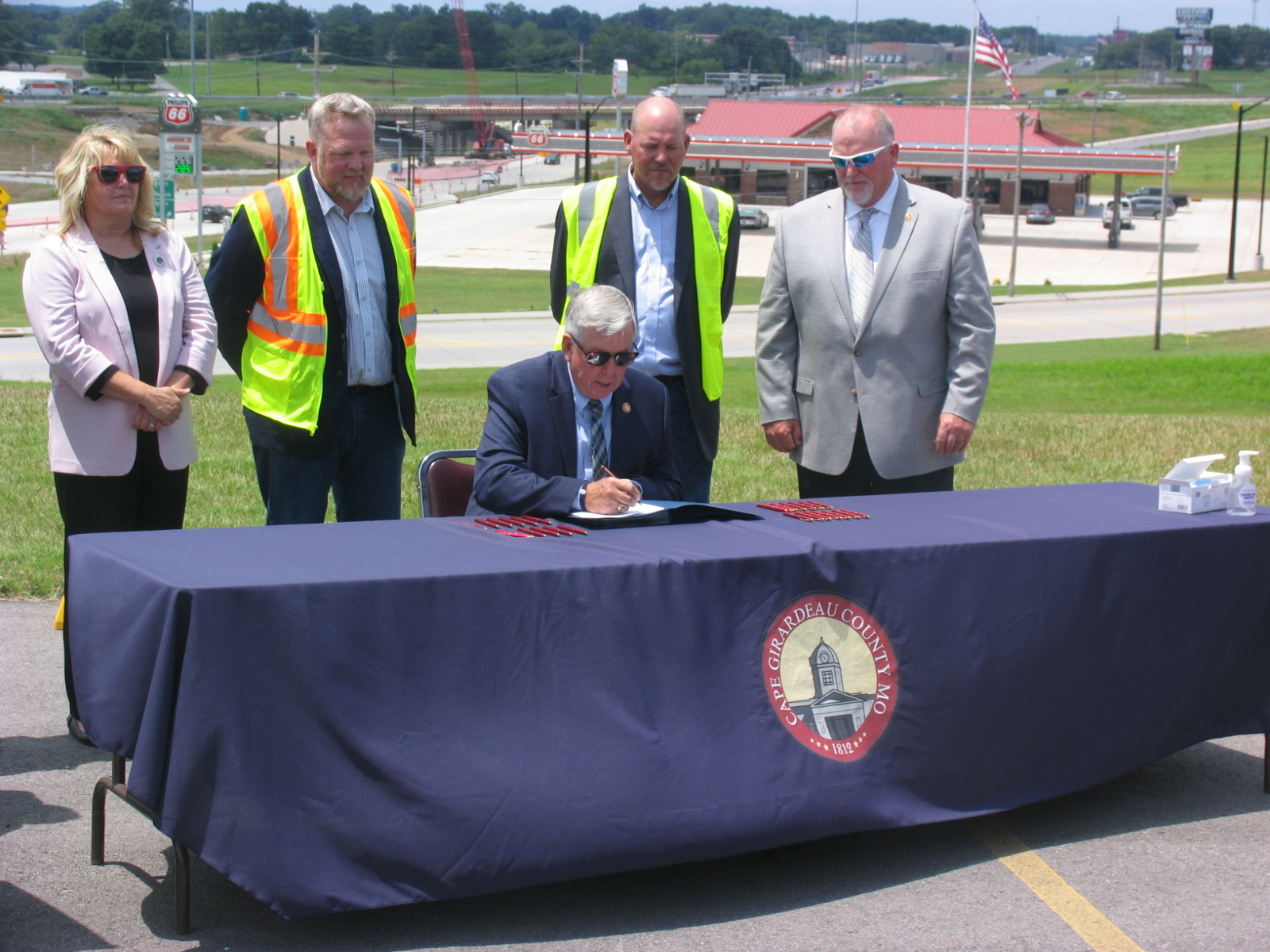 With the diverging highway project in the background, and surrounded by various government officials and employees of MoDOT, gov. Mike Parson signs Senate Bill 262 into law. Photo by Gregory Dullum

On a site overlooking the new I-55 bridges and the diverging diamond intersection at Exit 99, Gov. Mike Parson signed SB 262 into law.

SB 262 increases revenues for the State Road Fund and local transportation projects by increasing gas tax by 2.5 cents per gallon annually for five years, starting in 2021.

It has been 25 years since Missouri last raised its gas tax.

“What a great day we have to recognize and celebrate one of the biggest policy movements in decades for the State of Missouri,” said Patrick McKenna, director of the Missouri Department of Transportation. Raising the gas tax was last done on a policy basis in 1992, and it was last adjusted in 1996.

“In that period of time, we’ve lost nearly half the purchasing power of the gas tax itself. The 17¢ that’s in place right now only buys the equivalent of 7¢ from the last time it was raised. And that’s why we haven’t got to many of the important infrastructure projects around the state that we know are overdue,” McKenna explained.

“Senate Bill 262 is about safety, its about jobs, its about economic development,” said State Rep. Becky Ruth of Festus.

“This strikes a great balance,” Ruth said. “We have the balance of those who want to invest their money into our roads and bridges and those who feel like they want to get their money back. They are able to do that from Senate Bill 262. With a simple form, they can apply for a refund of the entire amount of that new tax,” she said. “So I think it strikes a good balance and it’s something I’ve seen a lot of Missourians get behind.”

Sen. Dave Schatz of Sullivan, said passing this bill was “critical to the success of this state. … Road and bridge funding has obviously been neglected for the past 25 years. So getting this across the finish line with the help of many, many people was very critical, and I think we’re going to see the effects of this for a long time.”

Schatz quoted State Rep. Jamie Burger of Benton who coined a phrase, “The longer we delay, the more we decay.”

“When I first became governor, I asked myself, what is the one thing we can really move the needle in this state of Missouri?” commented Parson. “If you really wanted to change people’s lives, what would that be? There are two things I said at the time. It was infrastructure and workforce development. If you get those two things in place — which we have over the last three years — we can reap the benefits of that.

“That’s why we’re leading the nation in our economic recovery; why we’re second in the nation for apprenticeship programs; why we’re seventh in the nation for people wanting to come to our state; we’re fourth in the United states for manufacturing jobs. The reason those people come here and want to expand their businesses and bring business here is because of the infrastructure that we’re putting in place. They also know we’re preparing our kids to be tomorrow’s workforce.”

To get SB 262 “across the finish line,” which is important to the infrastructure, Parson said residents were given the option not to pay the increased tax. “If you don’t want to do it, you don’t have to do it. I can’t imagine anytime in our state’s history that we’ve ever passed anything like this, where we’ve given the people an option.

“But I will also tell you this. As the governor of the state of Missouri and as the Constitution of the State of Missouri says, we fund our highway systems through this process. And we all need to remember that’s how we do it. It’s our time to make sure we continue that tradition. We fund our infrastructure in this state. If we do that, good days are ahead for this state.”

SB 262 was needed because Missouri has the seventh largest transportation system in the nation but ranks 45th in available revenue per road mile.

All revenue that SB 262 will generate is constitutionally required to be used to maintain roads, bridges, and the overall transportation system.

“Rural Missouri’s roads and bridges have been neglected for too long. By signing SB 262, Governor Parson is boosting road and bridge funding for the first time in 25 years. We are pleased that this increase will be distributed fairly between urban and rural areas, and that it will return our transportation funding to approximately the purchasing power it had when it was last raised in 1996.

“Missouri will no longer be next-to-last in road and bridge funding. All Missourians can look forward to a safer and more reliable highway system thanks to the actions of the Governor and our state’s leaders.”