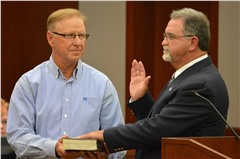 Former Cape Girardeau County Sheriff John Jordan was sworn in as the United States marshal for the Eastern District of Missouri on Sept. 19 at the Rush Hudson Limbaugh, Sr. Federal Courthouse in Cape Girardeau.

Jordan is now one of 94 presidentially appointed marshals in the country. He will lead federal marshal services for the Eastern District of Missouri, which covers the eastern half of the state including St. Louis and Cape Girardeau.

The U.S. Marshal Service was the first federal law enforcement agency in the country, having been established in 1789 at the same time the constitution was implemented. The agency was patterned after the county sheriff, which Jordan said was a reason he was qualified for the position.

Jordan will not have to move for the position, but will split his time between the marshal’s office in St. Louis and Cape Girardeau. He added that he will also travel and visit every county in the eastern district.

“I’ll probably be the first Marshal to do that, but I know every sheriff out there,” Jordan said. “I know lots of the police chiefs, so it’s a distinct advantage to have that geographical background and know all of these people that are already elected or appointed.”

Jordan is only the second U.S. marshal to come from Cape Girardeau County, following U.S. Marshal Edward F. Regenhardt. President William Howard Taft appointed Regenhardt in 1910. The only other marshal from southeast Missouri was Kenneth Link, who served approximately 50 years ago.

Ferrell spoke about how Jordan never backed away from a challenging career move and has led a life of service. Swingle said there is no man he has ever met who exemplifies the three-word motto of the marshal service — justice, integrity and service.

“He would be your worst nightmare if you were a criminal and John Jordan was on your tail,” Swingle said. “On the other hand, if you were an innocent man, you would want him investigating you because John never got tunnel vision to focus on an innocent person while the guilty person was getting away.”

After Hon. Stephen N. Limbaugh Jr. swore Jordan in as U.S. Marshal, Jordan received a standing ovation from the crowd that included family and friends. He said the support from the filled courtroom was overwhelming.

Jordan spoke on faith at event, saying it got him through his long career in law enforcement.

“My faith has always reminded me that whenever and whereever evil or tragedy occurs, it will always be outdone and overcome by love, hope and goodness from the people and the community where it happens,” Jordan said.”

Jordan said his faith never allowed him to become cynical as an officer. He said it is common in law enforcement to see the bad and start thinking everything and everyone is bad. Jordan said that’s only 10 percent of the world and that good is all around us.

“If you walk into the woods and all you are used to doing is cutting down dead wood, you don’t see all the live beautiful trees all around you,” Jordan said. “They are everywhere, but you have to look for them.”

In one of his first acts as U.S. Marshal, Jordan has formed a chaplain program, similar to ones in military branches and other federal organizations.