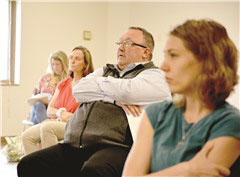 The Cape Girardeau County Public Health Center’s mask mandate was unanimously extended for another month after a meeting filled with elevated emotions and interruptions. The mandate is now in effect until the public health board’s next regularly scheduled meeting on Oct. 27.

The mask order states that all people over the age of nine must wear a face covering at any business or public space in the county when they are around people not of their household. The mandate does have exceptions for health conditions that prohibit wearing a mask, eating and drinking, exercising and services involving the nose or face.

The board limited public comments during its regularly scheduled meeting on Sept. 22 to two minutes, but opened up to online statements this month. While all in-person public comments during the meeting were against the mask order, the majority of the online submissions were in favor of extending the mandate.

The board received 245 submitted comments. Board vice chairwoman Georganne Syler, who led the meeting due to board chairman Roland Sanders’ absence, stated that 136 of the comments requested that the order be continued, 98 requested that the order be rescinded, five requested amendments to the order and six had unrelated comments. Syler said 55% of the responses were positive toward the mandate and she counted 15 comments that wanted the mandate enforced more.

Erin Jones, a PHD student and registered nurse who is researching COVID-19, was one of many speakers who did not wear a mask as she addressed the board. Jones asked board members what the benchmark would be to remove the mask mandate.

Syler, who admitted that many of the online comments also ask for a benchmark, said the board does not have a set guideline, but is using recommendations from the federal government. “The White House suggests that we open up the plan when the positivity rate drops below five percent,” she said. Syler said Cape Girardeau County has a positivity rate around 10%.

She added that other White House guidelines for opening up include having a two-week downward trend in the number of cases and the number of hospitalizations. “Cape County is not at that point right now,” Syler said.

Public Health Center Medical Director John Russell added that when comparing the county’s number of COVID-19 cases to neighboring counties in the past month, Cape Girardeau County has a much lower rate of confirmed cases.

Lee Thompson, pastor of Lighthouse Baptist Church, said he plans on suing the heath center, raising funds for the lawsuit using GoFundMe. He mentioned how the Saint Francis County’s mask order changed due to opposition from attorney Tom Burcham.

Brenda Pfefferkorn asked the board if the reported COVID-19 deaths in the county really died of COVID-19 or if they were just exposed. Russell replied that the health center doesn’t decide when a death is caused by COVID-19, the patient’s doctor does.

Pfefferkorn also asked if the public health board receives funding related to the number of COVID-19 deaths in the county. Public Health Center Director Jane Wernsman said they do not.

Mary Fountain asked the board if they were counting false positive test results or if the recent increase in positive cases in the county was due to more testing being done.

“Information is not being openly debated,” Carol Meza said. “Your mask order is the last straw.” She added that she has “no trust” and “no confidence” in the board and that they should trust the public’s personal decisions.

Shelby Lucas, a teacher in the county, complained that there has been no instruction given to students about keeping their mask clean. “None of my students wash masks,” she said. She argued that masks might be adding to increase of cases in the county and said one of her students became sick when he reused a disposable mask.

Rita LaVanchy called the board “a rouge health department,” and spoke about another meeting in the Osage Center that was filled with people not wearing masks. She also took issue with the use of rising COVID-19 cases justifying extending the mask order. “Cases mean nothing,” LaVanchy said. “They are not the standard on which you make mandates and take away constitutional rights.”

Kristen Lewis clarified that she was not speaking out against the use of masks – only the mask mandate. “I am against the government overreach of this mask order,” she said. Lewis said she grew up in West Germany about an hour from the East Germany border during the cold war. She said the ability to report others who do not wear mask reminded her of the communist country of East Germany.

Myron Todd was concerned that people cannot be identified of committing crimes in the county because they can wear masks. He viewed the mask mandate as illegal and unconstitutional. “I didn’t vote for it and I don’t know any other citizen here who has,” Todd said. He added that he also knew a 30-year-old woman who had had a fatal asthma attack while wearing a mask.

Syler reiterated that the mask order does have an exception for those with medical reasons not to wear a mask, such as having asthma. Board Member Diane Howard added that many of the online comments made against the mask mandate included changes made not due to the mask mandate, including children under nine years old needing to wear masks at school, limited building occupancies and businesses closing due to COVID-19 exposures.

“Not one single business that has chosen to close has been closed by order of the health department,” Howard said. “They’ve been closed by the owners of the businesses.”

After an hour of public comments opposing the mask mandate, the vote to extend the order could not initially be had due to continued questions and comments from those in attendance.

After one member of public yelled, “What is wrong with you?” towards the board and left, the board tried to continue with their meeting but was interrupted by several other public attendees.

At that point, Syler decided to end the meeting. After a few minutes deliberating with other members and public health center staff, the board decided to call an emergency meeting an hour later in order to vote on extending the mask mandate and to finish their regular meeting agenda.

The emergency meeting, which started at 12:20 p.m., was open to the public but did not allow comments from the audience.

Board Secretary Emily Collins initially suggested extending the order for only two week, but board members John Freeze and Howard questioned if there would be any significant changes in the next two weeks. Howard added that if warranted, the board could still call a meeting in two weeks if there are any changes.

Board members added that they will review data that was given to them by the public before the next meeting on Oct. 27. The meeting is scheduled for 10 a.m., but a location has not yet been set.