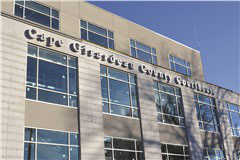 The Cape Girardeau County Courthouse is set to open in approximately a month, capping off at least nine years of work to get the project completed. Presiding Commissioner Clint Tracy said the new courthouse was a goal since he took office in 2011.

The new $18 million facility located at the corner of North Missouri Street and West Washington Street will replace the courthouse in Jackson, as well as the Common Pleas Courthouse in Cape Girardeau. In February, the county gave full ownership of the Common Pleas Courthouse to the City of Cape Girardeau, which plans on using the facility as its new city hall.

Tracy said that the process of building the new courthouse began when language was changed in state law to allow the county to legally consolidate courthouses in 2011. From there the county implemented a citizen advisory committee and acquired a needs assessment of the county’s buildings.

In 2015 the citizens of Cape Girardeau County approved a use tax for constructing and maintaining the new courthouse, and in 2018 Penzel Construction’s design-build team was picked to lead the construction project.

Commissioner Charlie Herbst said the construction project has gone well, but they are happy it is almost over. “We’re ready for it to be done, and I think employees are excited now to get into the building,” Herbst said.

Herbst said the construction will be substantially done by the end of the month, but there will be a transition period where they move people into the new building.

Herbst said that transition will start in the coming weeks, but court may still be held at the older courthouses during this period. “The virtue of having two working courthouses right now is that we are not in that big a hurry,” Herbst said.

The 82,000-square-foot building will house six courtrooms over three stories.

The entrance is an open, two-story space with large glass openings to allow natural light into the building. On the first floor will be two courtrooms of varying sizes, a jury orientation room, office space for the court clerk, information technology offices and security at the entrance of the building.

Up the entrance stairs to the second floor, which includes two additional courtrooms with jury deliberation rooms and the prosecuting attorney’s office suite. The third floor includes the final two courtrooms, judge’s chambers and drug court.

A garage level houses limited parking, building support and a secure corridor to transfer inmates from the county jail. Herbst added that the sheriff’s office will also need time during the transition to practice the new inmate transfer procedures.

“They’ve done it the same way since 2001 when they moved to the new sheriff’s department,” Herbst said. “But I think they’re all excited about the new security and just having ample space to have court now.”

Commissioner Paul Koe-per called the opening of the new courthouse historic, pointing out that it has been 112 years since the county has built a courthouse. He said the new courthouse will be able to fit more with the current times, allowing for more security and technology.

“Each court will have the new technology including new microphones and will be internet accessible,” Koeper said. “It’s all transformed to the era that we are in.”

He added that there are small changes from the previously used courthouses as well, including wider hallways and more space for jury deliberations.

After the new courthouse is officially open, Koeper said the commission will look at better utilizing the space at the county administration building.

He said there have already been major improvements at the administration building, including electrical, HVAC and elevator work, but there should be effort put into making the building easier for the public to navigate. “That’s been a goal of mine for two or three years, but we got busy with the courthouse,” Koeper said.

“The majority of people want to come in and talk to the recorder of deeds, the assessor and the collector,” Koeper said. “When you are doing something with property or are paying bills, right now you have to jump from floor to floor.”

He said that the commission hopes to move those offices closer together to make it easier for the public to do business. In addition, small improvements like wall upgrades and painting are on the agenda.

“Just as everybody would with their own house, we try to keep this house in order and make whatever improvements we can,” Koeper said.

Another topic of discussion once the new courthouse is completed will be the future use of the current Jackson courthouse. Koeper said they aren’t ready “to pull the trigger” on what that future use will be, but that it will be something they have to answer in the next year or two.

“That would allow us to look forward to the next 15-20 years and have a concerted effort to prioritize projects and schedule them,” Tracy said.

The county is also working on consolidating dispatch centers with the City of Jackson, having recently signed an intergovernmental agreement for the project. Herbst said the process is still ongoing, but they are hoping to be onboard around the end of this month.

He added that the county has already officially hired one of Jackson’s dispatchers and has moved some backup equipment from the current Jackson Police Department.

Improvements at the county parks will be more routine, since the county has competed the work at the South Cape Girardeau County Park lake. The project was a partnership with the Missouri Department of Conservation. The lake and pavilion was redone, and a new walkway and lighting was added around half of the lake. The project also added erosion control around the lake’s edge.

Koeper said that they are using the majority of their highway funding to maintain the roads they currently have instead of prioritizing new roads.