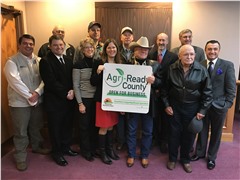 Cape Girardeau County will soon be distinguished as an Agri-Ready County by Missouri Farmers Care, an organization that is made up of 36 agricultural businesses and organizations that support Missouri farmers and promote the continued growth of the agricultural industry in the state.

Because of agriculture’s substantial economic impact in the county and the county’s access to river transportation, “there’s a lot going on that makes Cape Girardeau County a very key county for this process,” McCarty said.

There are currently 48 counties with the distinction, including Bollinger, Madison, Wayne, Butler, Stoddard, Scott and New Madrid. Dunklin County has also recently submitted an application.

“By the end of the first quarter of 2018, I think southeast Missouri may be the first Agri-Ready designated region in the state,” McCarty said. “I think that really speaks volumes.”

The program is voluntary for counties and it does not cost anything to participate. The designation lasts a year, and is renewable on an annual basis.

McCarty said counties with the distinction have been able to use the Agri-Ready distinction to entice new businesses to move to their county. Audrain County, which was one of the first to gain the distinction, has recruited dairy farms and processors to move from higher-cost states on the east coast.

“This is not a program where we have a vision for what economic growth and development looks like for Cape Girardeau County, we just want to support the natural areas of emphasis,” Mc-Carty said.

In addition to the economic development aspect of the program, the program includes an educational component for area schools called Ag Education on the Move. The program aims to help students understand where their food comes from.

“Our program is a 10-week, hour-a-week program that meets state standards in curriculum and supplements that with hands-on activities and videos and things that speak to every kid’s learning area,” McCarty said. “We will launch that in Cape Girardeau County once designated, with not only the educators, but with FFA chapters.”

The organization is developing agricultural technology and economic development programs, and McCarty said Agri-Ready counties will be the first to be able to take advantage of them.

McCarty visited the Commission in February and explained the program. The Commission then asked for community support before they sent their application.

Members of the Cape Girardeau County chapter of the Missouri Farm Bureau and the Jackson Area Chamber of Commerce attended the Dec. 12 county commission meeting to show their support for the program.

McCarty said the counties that have seen the most impact from this program have had many community organizations on board, from chambers of commerce to local art councils.

“This county has the capacity to take this program and use it for absolutely the most potential that it has,” McCarty said.