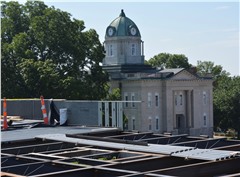 The Cash-Book Journal took a tour of the construction site for the new Cape Girardeau County Courthouse, which is still on schedule to be open by April 2020.

All of the foundation and structural steel work has been completed, with the majority of the floor slabs and exterior structural studs in place. Some door frames and interior metal stud framing has also been installed, making it easy to see the layout of some of the courtrooms and offices.

Masonry work has already started around the two elevators where prisoners will be transferred from the county jail to concrete holding cells. The holding cells, which are mostly completed, will connect from the prisoner elevators to the six future courtrooms.

The north and east walls of the facility has already been walled in and the roof is mostly covered. The south and west walls, which will have more windows, have not been enclosed. Phil Penzel, CEO of Penzel Construction, said the next major step for the construction is getting everything closed in.

Penzel confirmed that the $18.4 million project is still on schedule to be completed on March 31, 2020. Construction initially got behind early in the process, when foundational piers had to be drilled 70 feet into the ground before they found solid footing. Penzel said they hit an underground cave, making the process more difficult than originally expected.

Since then, the construction hasn’t had any major issues and has gotten back on schedule. County Commissioner Paul Koeper added that even minor issues have been minimal.

The courthouse has three public floors, as well as a basement for staff parking and prisoner transfers. The main entrance will be located on the southeast corner of the facility, with most public pathways being on the south side of the building.

The southwest corner of the courthouse, which is the only section of the building currently without concrete flooring installed, will house public restrooms and public elevators.

On the first floor will be two courtrooms of varying sizes and a jury orientation room open to the public. Office space for the court clerk and entrance security will also be located on that floor.

The second floor will house two more courtrooms with jury deliberation rooms and the prosecuting attorney’s office. Commissioner Charlie Herbst said the jury rooms will be a great improvement from the existing courthouses, where there is only one jury room per courthouse and each is small and near the back of the building.

“If we have two jury trials going on at the same time, they each have a jury room, restrooms and entryway,” Herbst said. He added that they will also be easier to evacuate in the event of an emergency.

The third floor includes a fifth courtroom and the drug court. The plans also include room for a sixth courtroom, which Koeper said the Commission will decide whether or not to finish this week.

The drug court on the third floor and the prosecuting attorney’s office on the second floor will each have a public reception area, which Herbst said will allow for more privacy and security. The current drug court is located in the basement of the Jackson courthouse.

The third floor will also house office space for each of the four judges working in Cape Girardeau County, as well as two visiting judges from Perry County.

The base of the exterior limestone, which was quarried in Perryville, has started to be installed. That design choice was made to match the look of the original Jackson courthouse, built in 1908.