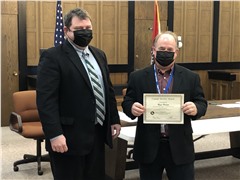 Assessor Pete Frazier said budget reflects county officials reducing spending to a point that still satisfies required operating costs. He said the operating costs and sources of income have remained relatively steady, but there were some changes last year due to the COVID-19 pandemic.

“We had an unusual year in 2020,” Frazier said. “Given that unusual year, activity was not quite what we anticipated it to be, both in revenue and on the expenditure side.” Frazier said he expects 2021 to be more reflective of a “normal year.”

The general revenue budget, which covers most county offices, totals $17,-876,018 in budget appropriations. That includes $3.2 million in capital improvement funding that was moved out of the fund’s unencumbered balance.

• The county commissioners approved $10,000 from the county’s capital improvement fund towards a needs analysis on potentially adding a two-year technical community college in the area.

The cities of Jackson, Cape Girardeau and Perryville, as well as Perry County, have also contributed to the needs analysis.

Rich Payne, the chairman of the Committee for Affordable Technical Education, spoke to the commission about the project and the committee’s next step. He said the needs analysis will include a community survey and answer questions on the financial viability of a community college.

Payne said other technical education solutions they will look into are working with Mineral Area College, working with Southeast Missouri State University or a public/private partnership.

“No matter what solution you come out of there with, that needs analysis is going to pinpoint where we need to go, what the need is and what the community wants,” Payne said.

The needs analysis will cost $98,375. Including the county’s contribution, $90,000 has been raised for the project. Payne said he was confident he would be able to raise the additional $8,375 needed.

• The County honored Treasurer Roger Hudson for 15 years of service, as of 2020. Presiding Commissioner Clint Tracy said county service awards are typically given during the county’s Christmas party, but that party was not held last year due to COVID-19. Hudson has served as Cape Girardeau County treasurer since 2005.

• The county commission approved a $122,871 bid from Bigham Wireless Consulting to purchase digital pagers for emergency management. The new pagers are the last piece needed in the county’s switch to the state-run MOSWIN radio system.

• The commissioners approved requests from the coroner’s office to purchase a Dodge Grand Caravan for $11,600 and a Ford Expedition for $21,500. The two vans were purchased from the state’s surplus property. The commission also approved the purchase of vehicle ramps and stretchers for the two vehicles.

• The commissioners approved the purchase of 100 Digium D65 telephones for approximately $229 each for a total of $22,944. The county is moving to a virtual-based phone system platform, and plans on switching to the new handsets gradually, rather than all at once. The county has around 370 phones in total.

• The commissioners approved the disbursement of $16,500 to the Safe House for Women this year. Funds for domestic violence shelters are collected from marriage license fees, decrees of dissolution of marriage fees and civil case filing fees. The Safe House was the only entity that requested use of the funds from the Domestic Violence Authority Board. The Safe House will receive the funds in two equal payments of $8,256.61 in January and July.

• The commissioners approved a contract renewal with Stoddard County for juvenile detention services.

• The commissioners approved a request to advertise for website design services. Commissioner Charlie Herbst said the new website will be “a lengthy process” that will involve discussions with all office holders to see what they need.

• The commission approved a $13,854 purchase of new streetlights at Cape Girardeau County Park South. The purchase from Metro Lighting, who previously provided lights and poles at the park, will complete the lighting around the front of the lake.