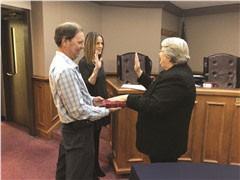 Barbara Gholson was sworn in on Monday, Dec. 3, as Cape Girardeau County Collector, after the resignation of Diane Diebold.

Diebold handed in a letter of resignation to the county commissioners on Nov. 27, effective Nov. 30.

The commissioners accepted her resignation, and they appointed Gholson in an interim capacity until the end of Diebold’s term. Gholson, who won the Nov. 6 election for the collector position, will start her elected term on March 4.

In accordance with state law, the books under Diebold are closed and an audit will be performed. Presiding Commissioner Clint Tracy said there should be no disruption in collections.

Before taking the collec-tor’s position, Gholson worked in the collector’s office for 20 years as a deputy collector. She is a lifelong resident of the Tilsit/Gordonville area.

Gholson told The Cash-Book Journal before the election that her major goal in the position would be to get tax files online for citizens, companies and license bureaus.

•  The Humane Society of Southeast Missouri presented their budget proposal to the county commission for next year. The organization receives a portion of its budget from local municipalities to pay for its animal control services.
The organization has provided public health benefits to the area by reducing dog bites and lower the amount of stray animals in the area through their spay and neuter services. They also provide pet help to pet owners through behavioral techniques for their pets and offering pet food if needed.

The Humane Society is asking for $64,166 for continued services for 2019. The county had previously paid $33,000 for services in 2018, with the Humane Society providing the rest of the costs for the animals through donations and grants.

Humane Society staff said contracts with local municipalities has only accounted for 19 percent of their annual budget. The contracts are based on how many animals are brought in from that jurisdiction. For Cape Girardeau County, that includes all areas in the county that are not in the City of Jackson or the City of Cape Girardeau.

The county is second largest contributor of the animals to the shelter, and accounts for 21 percent of intakes. Most of these stray animals are brought in by county citizens, not county employees.

The change in rate was due to budget concerns and through talks with other shelters on how they charge local governments. The commissioners said they would review the proposal and their budget in the coming weeks.

• The county was re-certified as a StormReady county during the Cape Girardeau County Commission meeting on Dec. 3. The county has been a member since 2002, being prepared for all types of severe weather. The distinction is reviewed every three years.

To receive the designation, the county must have hazardous weather plans, a emergency operations center, monitor weather conditions locally and have multiple ways to alert the public of severe weather warnings.

• Michael Sweeney with the State Historical Society of Missouri gave a presentation on the 200th Anniversary of Missouri Statehood in 2021. He provided information on how the county can celebrate the bicentennial.

Sweeney said that the goal of the bicentennial celebration is to promote community engagement projects and local commemorations throughout Missouri. State non-profits are already working together on multiple statewide projects, with more in the planning stages.

There is not a prearranged way to prepare or celebrate the bicentennial at the local level. Instead, organizations are encouraged to create their own programs that use the bicentennial resources provided at the state-level. More information can be found at Missouri2021.org.