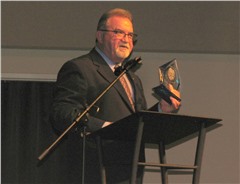 The 49 law enforcement officers from Southeast Missouri who gave their lives in the line of duty since 1875 were remembered at a ceremony Thursday night at Cape Bible Chapel in Cape Girardeau.

Members of various law enforcement agencies, Seniors and Law Enforcement Together (S.A.L.T.), family members of the fallen officers and the public attended.

Cape County Sheriff Ruth Ann Dickerson presented the Roger Fields Award of Excellence to former sheriff and current U.S. Marshal John Jordan. Jordan said he has a drawer full of awards he has received over the years. He doesn’t put them on display, he said, because “it’s not about me.”

However, this award has special meaning to him, since he was very close to the award’s namesake, Roger Fields. “This one’s going on my desk,” he promised.

Lt. Alex Broch of the Jackson Police Department and Lt. Sean Adams of the Cape Girardeau County Sheriff’s Office presented awards to student essay winners. The theme was “Our Heroes.”

The first place winner in the third and fourth grade division was Faith Price of Oak Ridge Elementary.

Sandy Kasten, director of the Missouri Department of Public Safety, was scheduled to be the keynote speaker. She was unable to attend because of recent weather disasters experienced elsewhere in the state.

S.A.L.T. Treasurer Doug Austin spoke in Kasten’s place, discussing the hero status of those who gave their lives and their family members who “share a special burden.” He said we should never forget them.