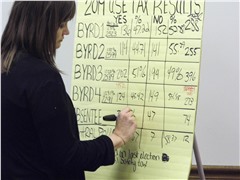 “Third time’s a charm” is an old saying. It’s not true when it comes to requesting permission from Jackson city voters to charge a use tax on out-of-state purchases. Voters turned down the request Tuesday 690 (53.16 percent) to 608 (46.84 percent).

A dozen people, including the mayor, some aldermen, businessmen and the Jackson Area Chamber executive director — all supporters of the measure — gathered in the Jackson Area Chamber of Commerce Board Room to watch the election results come in. The mood was grim and the silence was broken only by brief statements of disbelief as the measure slowly sank beneath a sea of No votes.

“The City of Jackson will continue to place a priority on identifying revenue streams to supplement dwindling local sales tax revenue. The issue of use tax will continue to be significant as online shopping sales increase in coming years, and local sales tax revenue remains stagnant or even decreases. We know that Jackson residents place a high priority on our City’s future, and we’ll continue working toward those projects identified as priorities when funding sources are available.

“Thank you to all those who took time to learn about use tax, and to our business community for supporting this important issue. Thanks also goes to the Jackson Board of Aldermen and the Jackson Area Chamber of Commerce for their help in educating the public about the use tax.”

The only other contest in the City of Jackson was for alderman in Ward 4. Incumbent Tommy Kimbel beat out challenger Steven Lee, 158 (64.23 percent) to 84 (34.15 percent). There were also four write-in votes.

The Oak Ridge R-6 School Board will have two new members as the two incumbents whose terms were up did not run for re-election. James Urhahn garnered 169 votes (31.12 percent) and Ronald Tracy received 146 votes (26.89 percent) to win the election. Chris Layton came in third with 131 votes (24.13 percent) and Robert Eisenhauer received 94 votes (17.31 percent).

For more details, see the April 10 issue of The Cash-Book Journal.