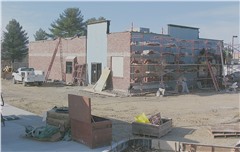 A $579,754 four-unit retail center has been built by Sides Construction Co. on the site of the old Basic Fuel gas station at 2927 E. Jackson Boulevard.

Concrete was poured in the parking lot last week and the building stands ready for tenants, although there currently are no renters, according to Real Estate Broker Jeff Martin.

The suites are ready to be “fitted out” according to renters’ specifications. The building becomes available to rent this week. Contact Martin at 573-243-2555 for more information about renting.

Meanwhile, just six blocks to the west of that complex, at 2305 E. Jackson Boulevard, brick was being installed on the outside of the new Dexter BBQ building.

Bruce Vancil, owner of Dexter BBQ, was hoping to move into his new building by the end of December. There have been construction delays and increased construction costs because of the booming economy. “Every-body’s busy,” he said.

Vancil rents his current location, and he said there were some problems with that location.

“Where I was at, the building has a lot of problems,” he said. “It’s the only building I rent. It’s not laid out for the way I do business.” Dexter BBQ currently has six restaurant locations and a packing plant in Dexter, and this was the only building he was renting.

The new structure will be smaller than the current location (3,400 square feet compared to 5,000 square feet), but it will be laid out more efficiently for his workers. “We have a certain way to build a building that’s efficient,” he said. “It will have 1,000 times better parking, be 1,000 times more efficient and have a better drive-thru.”

The new location will seat about 98 diners and will have a party room that seats about 50.