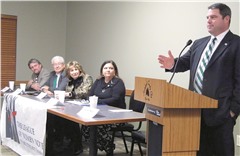 About 40 people packed the room. Brian Gerau, executive director of the Jackson Area Chamber of Commerce, was impressed with the turnout. Usually, only about 10 people turn out for these meetings, he said.

Elected officials spoke for five minutes each, and then separated to different tables so the public could sit with them and ask questions.

“2017 was a very busy year,” he stated, and described improvements made at the County Park, with Levi’s Adventure Trail opening on the south side and work progressing on Veterans Memorial Park on the north side.

He mentioned that the County now has a prescription drug monitoring program to help fight the opioid crisis.

Legislatively, the County would like to see the requirement that counties pay prevailing wage for construction projects be eliminated. Private industry is not required to pay the higher wage. “We don’t feel we should be penalized,” he said.

Looking ahead, the County will start working on the new justice center to replace the old Jackson courthouse.

State Rep. Donna Lichtenegger of Jackson discussed bills she has worked on. One allows cities and counties to order a ban on burning during droughts. A second bill allows retired dentists from other states to teach at the three dental schools in Missouri without getting relicensed in this state. A third helps nontraditional students gain access to Western Governors University.

A fourth bill would prevent abortions after a baby in the womb is 20 weeks old because it can feel pain at that age.

A sixth bill dealt with a degree program in the State of Missouri.

State Rep. Kathryn Swan of Cape Girardeau said, “My primary concern is your safety.” She has worked to support law enforcement.

Her second area of interest is education. She has filed a bill to require more accountability of charter schools and to allow business professionals to get temporary teaching certificates so they can teach students in their area of expertise.

Swan is working to make sure the state’s business climate is free from burdensome regulation.

“I’m proud to be your mayor,” said Cape Girardeau Mayor Harry Rediger. He included everyone in that statement, because people who don’t live in Cape still go there to work, eat, shop and play.

“We have a lot of things in the hopper,” Rediger said.

The City of Cape will have the renewal of a 3/8-cent park and rec and storm water sales tax on the April 3 ballot. “We have a set of doable projects,” he said, that depend upon the passage of that sales tax renewal. This is not a new tax but a renewal of one already in place, he stressed.

Another big project is the “Purpose Built Community” on the south side of Cape. This is a 10 to 15-year project that will improve that area.

Cape’s business park at exit 102 on I-55 is ready for more economic development.

The airport is being improved to accommodate the new airline with its bigger jets and passenger loads. The City’s comprehensive plan is being updated and work is being done to bring a new music festival to Cape. The City of Cape is looking for a new city hall and is seriously considering moving to the Common Pleas Courthouse.

Jackson City Administrator Jim Roach spoke on behalf of Mayor Dwain Hahs, who was unavailable. He listed six goals for 2018:

1. The ballot issue in April will ask voters for a 1/2-cent increase in the sales tax to pay for 4-5 additional police officers, one fire department training officer, and to build a new police station.

2. Improve traffic flow in Jackson following a traffic study (see related story in this issue of the CBJ). A stoplight will be added at East Main and Oak Hill Road, and the Board of Aldermen is studying the possibility of putting a roundabout at East Main and Shawnee Boulevard. Work is being done to improve traffic around the public schools, where there is congestion before and after school.

4. A retail development specialist was hired in conjunction with the Jackson Area Chamber of Commerce. This coming year, there will be a focus on the recruitment of new businesses, particularly to bring another grocery store to Jackson.

5. The Board of Aldermen will explore the possibility of having curbside recycling in Jackson.

6. Upgrades are planned to the City’s park system.

State Rep. Wayne Wallingford was unable to attend the meeting.