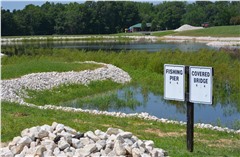 The lake at South Cape Girardeau County Park has started to be refilled, as the largest portion of improvements around the lake is expected to be completed this fall.

According to Park Superintendent Bryan Sander, the county closed the lake’s drainage valve around May 15, after the riprap rock barrier around the lake was completed. The lake was drained in July 2018 to have the basin sculpted to increase depth diversities and improve fish habitats.

Due to the heavy rain weather over the past month, the lake has filled up rapidly. Sander said that has been great in some ways, but has prevented the county from moving on to the next stage of the project – adding a lighted sidewalk around half of the lake.

“There’s quite a lot of dirt work to be done when we do the sidewalks, and the way it has to be done can’t be done in stages,” Sander said. “We have to do all the dirt work first and then go back and put the sidewalks in, so we don’t want to open that up until we get into a more dry period.”

Sander hopes that will be in the next few weeks, saying everything is in place to start as soon as there is no rain in the forecast for 10 days in a row. “We are all set out to do it,” he said. “We have everything in place and we are ready to pull off a couple of other projects that are currently going on to do it.”

The project is a partnership between the county and the Missouri Department of Conservation, with the conservation department funding most of the project in an effort to promote fishing and enhance the habitability of aquatic wildlife.

“They’ve been guiding us as we are doing the project on where we need to cut the channels in and where we need to place the brush piles,” Sander said. “They are looking for to make better fishing for anglers out there.”

Sander added that conservation department has already put in a stock order to restock the lake this fall. The department said last year it plans on adding bass, bluegill, red ear sunfish and channel catfish.

As part of the project, three fishing jetties have already been added to the lake, with two of the jetties getting concrete walkways to them when the sidewalk is installed. The third jetty, which already has grass on it, will remain that way until the sidewalk goes around the entire lake.

The sidewalk and lights that are planned for this summer will only cover about half of the lake’s 3,000-foot edge. Sander said the county plans on applying for a grant due in February to receive funding to finish the remaining half of the sidewalk project.

The lake improvements will include an added gazebo and a new fishing dock. Sander said these additions are not as weather-dependent as the sidewalks and may be completed this winter if they don’t get to it earlier.

He added the gazebo will be prefabricated, so it should only take a couple of days to install.

“I know this has been a long, drawn out process, but if people bear with us we will have it put back as soon as we can,” Sander said.